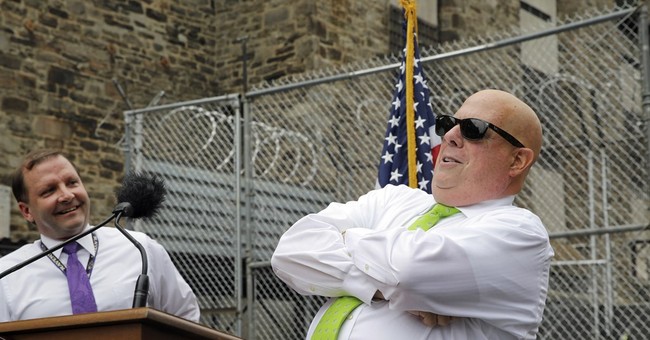 Over the past week, I have been reading and writing (hoping, whining, praying) about the necessary yet proper growing pains redefining the House Republican caucus in Washington D.C. With two milquetoast leaders on their way out (Boehner and McCarthy), and with the search for better leaders still ongoing, why not take some time to appreciate real conservative leadership, and what it can accomplish in one of the bluest states in the union?

Once a long-shot candidate, Republican Governor Larry Hogan of Maryland remains sadly an unsung hero for the conservative cause, fighting hard against cancer and illiberal interests which have eaten up his state, and forced so many of his fellow Marylanders to flee. Instead of joining the flight, he is fighting back, and winning!

He expanded financing and reforms for charter schools. He is welcoming businesses back to the Old Line State. The port of Baltimore is receiving more commerce with international trade. Not only did he balance the state’s budget without excessive taxes or fees, he repealed taxes, lowered tolls, and boasted about unprecedented revenue increases for his state. I have never read about a governor who literally had to beg residents in his state to claim their tax refunds. Larry is doing just that!

Of course, Hogan does not cover up or apologize for his predecessor Martin O’Malley’s abortive legacy. The Maryland media started investigating how much furniture the previous Governor took out of the people’s mansion while moving out. Overtones of Bubba and Hillary leaving the White House in 2001 came to mind. Just like Billary, O’Malley took “The People’s” furniture with him.

From the first week of his tenure, Hogan has launched committees and research into a redistricting commission, much like ours here in California. For decades, Democrats have been redrawing congressional and state legislative districts to their distinct and unjust advantage. Gerrymandering has undercut representative democracy, and Hogan wants to stop it. This reform is politically popular as well as necessary. Republicans in Washington need to focus on similar reforms.

In his private life, a proud husband, father, and now grandfather, Hogan is surviving lymphoma and thriving in spite of the ill effects of cancer treatment. A spokesman for cancer victims, but more importantly for survivors and their families, the Maryland Governor knows how to work with -- and work – the media. He takes young children to baseball games, and hosts fundraisers to support cancer research. Congressman Jason Chaffetz talks about spending more money on cancer research. Hogan puts his money where his mouth is.

Marylanders all around are praying for their governor to stay well and get better. On his Facebook page, residents from all around say “Thank you for your hard word. God bless!” During his American tour, Pope Francis paid the governor a visit, although the press was all caught up in his congressional speech in the follow days. Recently, the Baltimore press reported him as “unstoppable.” The Baltimore Sun now wonders – this is the “mainstream media” talking – Is Larry Hogan “unbeatable?” Such is the case with public servants who. . .*gasp*. . .serve the public!

Now, let no one think for one second that Hogan is a flimsy RINO or a purply Grimace of a governor.

Unlike the previous administration, Hogan is enforcing immigration laws, and now requiring Maryland law enforcement to cooperate with federal authorities following the arrest of illegal aliens. Pro-amnesty advocates stormed the mansion and protested. With political brilliance, the governor rebuffed their rebuke, relying on President Obama’s executive actions to justify the enforcement of immigration statutes. Ha! When will Congress start using President Obama’s lack of enforcement to turn him on his head?!

While demanding the rule of law, Hogan has undone unjust confinement, and shut down a blighted Baltimore City Detention Center, a disgraceful blight from the Civil War era. Hogan is redefining politics in Maryland, casting away the old, cluttered, and arrested ideas of Democratic hegemony.

In more incremental victories, Hogan has channeled his inner Scott Walker, too, and confronted public sector unions. He flirted with undoing a pay increase for the state workers. Unlike Walker, however, Hogan does not have the like-minded legislature (yet) much needed to enact long-term reforms, but at least he’s trying. He rightly praises the workers, but keeps moving toward making government work for everyone, not just unions.

On the Second Amendment, in spite of concerns from the right (that he would cave) and to the consternation of the left (that he did not cave), Hogan has expanded respect for individual gun owners and removed a number of sclerotic rules undermining this necessary freedom to keep and bear arms. Let me repeat: a red governor in a blue state expanded gun rights. Hogan’s one-time mentor in the Republican Governor’s Association, New Jersey’s Chris Christie, cannot boast of that kind of record.

When it comes to Planned Parenthood, some of its most vocal proponents agitated Governor Hogan to protect the funding. Refusing to take the bait, and recognizing political realities for the time being, Hogan dismissed the shrill fears of the Left: “We will be working long on the budget.” On religious liberty, Hogan did not cave to aggressive homosexual activists, and refused to ban travel to Indiana following the state’s passage of the Religious Liberty and Restoration Act.

Republicans in Congress need to understand this principle about fighting for principles: you can win even if you lose. Sometimes, waiting for the right time makes all the difference.

A leader who stands on principle, sticks to his priorities, uses the opponents’ tactics against them, who targets easy wins and paves the way for future victories, all while connecting with everyday Marylanders: Hogan is leading by example, and more Republicans, in Washington D.C. and throughout the country, need to adopt these “Hogan Strong” strategies to take back this country for We the People.