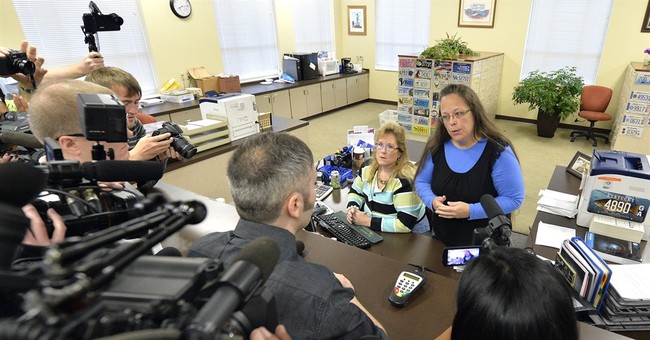 Like many people of faith (and faith is a recognition of an accomplished fact, not a belief in something fantastic), I was not pleased with the Supreme Court’s ruling to impose homosexual marriage on this country. Thankfully, I am not alone, and even before the ruling, columnists and activists were not giving ground on the definition and distinction of natural marriage.

Jeff Jacoby of the Boston Globe reported on pro-marriage forces mobilizing, even in deep blue Massachusetts, the same state where the shot heard round the world was fired, where the first court forced a redefinition of marriage onto a state. Jacoby applauded the courage of the National Organization for Marriage, in spite of the Left’s meandering, and mean-spirited arguments which rage: “You are on the wrong side of history.” This past week, columnist Jonah Goldberg illustrates how those “wrong side of history” arguments attempt to stifle democratic debate and coerce the opposition into capitulation. Apparently, those forces are not working.

More pro-marriage forces are now speaking up in government offices and stations. For those resigned to the Supreme Court’s illiberal supremacy, it appears that no one’s beliefs matter anymore. A civil servant must surrender his or her conscience to the will of the state, or a court, or any other government entity. In my South Bay, Los Angeles County supervisory, Republican Don Knabe is retiring, His likely successor, Steve Napolitano of Manhattan Beach, was cutting and unremitting when I protested that no one should have to administer a marriage license to a homosexual couple: “It’s the law.” He responded curtly. So what? Jim Crow was the law, as were laws which criminalized political speech against the government (Alien and Sedition Acts).

On the other side of the country, another government employee in bluegrass (yet now very much Red State) Kentucky, county clerk Kim Davis is refusing to comply with the Obergefell ruling, and will not issue marriage licenses to same-sex couples “for conscience’s sake”. In a deeper sense, her opposition is not solitary, since governors in other states (Texas, Louisiana, Kansas) have also issued protections for clergy and state employees not to violate their conscience, even though five lawyers in bad dresses issued a comprehensive, unsubstantiated redefinition of an institution which predates written law or legal precedent.

Back in the South Bay, I recently met with a fellow faith and family conservative, a Chinese-American who had fled the tyranny and repression of one overbearing Big Government regime. He and I talked about California politics, the need for policy and rhetorical precision to expand voter outreach and extend conservative values. Inevitably, we talked about homosexual marriage and its consequences. He argued with liberal friends about the need for “Live and let live.” I could not agree with him more, but this problem faces off against a militancy among homosexual advocates who refuse to allow those who disagree to maintain a living.

Then we discussed one the main arguments from gay marriage proponents and conservatives who have given up the fight. The rule of law must be respected, and therefore everyone, from the clerk to the courts, must comply.

The rebuttal to this argument lies with Martin Luther King Jr., who sat in a jail cell for refusing to comply with Jim Crow: “An unjust law is no law at all.”

What defines an unjust law? One in which those who impose it do not comply with it. I would further add that any law which violates natural law or resists science or market systems falls into the same desiccated category. By the way, everyone seems hell-bent on forgetting that this national imposition of homosexual marriage did not occur from elected officials or democratic consensus, but the arbitrary turn of phrases from five unelected, unaccountable judges. Once again, former Arkansas Governor and Presidential candidate Mike Huckabee had it right: “The Supreme Court is not the Supreme Being.”

The court which justified “separate but equal” would overturn itself fifty-six years later. Roe v. Wade is facing increasing resistance from science and technology, as well as moral and legal suasion, and has not yet crossed the fifty-year mark. The Obergefell decision is barely two months old, yet across the country Americans are not complying, including Kim Davis. How amazing and compelling that her act of nullification occurs in Kentucky, where Founding Father Thomas Jefferson directed his Resolutions against federal tyranny three hundred years ago.

More profound arguments about the nature of marriage must be addressed as well. Aside from this news site and discussion forum, most news outlets have refuse to allow me to discuss or debate this point – and one media company in Rhode Island rejected me for my ongoing statements on this point:

Homosexuality is not an identity, but a sexual behavior.

Why allow people who define themselves on flimsy premises redefine marriage? I am certainly not alone in making this argument. US Senator Rand Paul (once again, from Kentucky!) summarily dismissed a journalist’s gotcha question on “gay rights” by responding: “I don’t believe in granting rights to behaviors.” I stand with Rand on this crucial understanding. During Election 2012, Herman Cain defended the argument that homosexuality is a choice on “The View”.

Extensive scientific evidence does not validate homosexuality as genetic, either.

Massachusetts-based conservative pro-family group Mass Resistance has taken this revelation to restore a well-respected doctor at Beth Israel Deaconness Medical Center, and to protect counseling (which opponents wrongly call “gay aversion therapy”) for victims of sexual abuse, neglect, or loss. Medical professionals, including psychologists, affirmed in testy committee hearings the argument which questions homosexuality as an identity. They did not shy away from opposing a vocal minority which insists: “I was born this way, therefore I should be able to marry whomever I want to!”

Kim Davis, like civil rights activist Rosa Parks, refuses to comply with an unjust court ruling based on a misunderstanding of sexuality and marriage. I stand with Kim, and I hope that more people do the same.