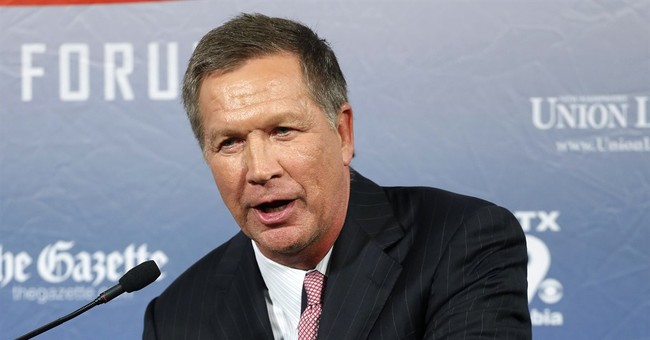 The First GOP Election 2016 Debate is based on a strict threshold. Of the seventeen candidates running for President (now including former Virginia Governor Jim Gilmore), only ten will be included in the first debate based on national polling.

Last month, I received an e-blast from US Senator Lindsey Graham critical of this debate standard. A strong foreign policy wonk, Graham has conservatives throughout the country wagging their heads in disappointment. Trailing in the polls at the time, he launched a petition to allow all candidates equal time for debate. He particularly blasted the undue influence of “the media” deciding winners and losers so early:

If the cable news channels or political elite have their way, the media will have a louder voice in our nominating contest than actual Republican voters. Under the current debate rules supported by the RNC, Brad Pitt would have a better shot of being on the debate stage than real candidates for president.

Voters should control our nominating process for president - NOT the media.

Under the rules from the media and supported by the RNC, the only way to get a ticket to the debate stage is to have a high national polling number. This criterion favors celebrities and candidates who have run previously with high name recognition.

Suffice to say, Graham is no Brad Pitt. Still, why should politicians strive for media hits to enter the first tier? The question then comes back: how does anyone decide who gets to speak and who does not? There has to be a winnowing process. Even ten candidates on stage is too much. Besides, Graham’s complaint lies mainly in his own low numbers, which are partly his own fault. He ignores another political reality: good statesmen have to be experienced celebrities to succeed nationally, because that’s how politics works.

Media popularity is an essential element in running a presidential campaign. Barack Obama would not have won the presidency without help from the press which propped and promoted him at every turn. Looking back 30 years, Republicans boasted under the banner of “The Great Communicator” Ronald Reagan, who manipulated the media to his benefit, and shaped the reporting long before Peter Jennings and Sam Donaldson could tear him down. He did not run from the media, but ran toward them, then ran over them.

Whether conservatives like it or not, running for national office requires more than right ideas and requisite experience. Candidates have to perform on the national stage, stir the hearts and minds of prospective voters, and inspire the otherwise ignorant and apathetic to get off their butts and get to the ballot box.

Media savvy is essential for this, and that is why “The Donald” is doing so well (so far) in the polls, why Ted Cruz and Rand Paul have effective followings. Trump is famous for being famous, a celebrity with the skills to punch back at the media rather than flee. Apparently, Graham picked up on this lesson on media necessity. When Donald Trump leaked his phone number to the public, Graham retorted by creating a minute and a half video clip: “How to destroy your cell phone.” I liked that commercial. I don’t like the Donald. Honestly, I would rather vote for Graham than Trump. The bigger point? With proper attention to media outreach, a candidate increases his visibility and thus viability.

Still, the media winnowing process for Thursday’s debate is producing another disappointing outcome, also from a policy standpoint, for another reason. Recent national polling indicates Texas Governor Rick Perry trailing beneath the threshold. Who is taking his place in ninth or tenth place? Ohio Governor John Kasich.

The Buckeye State governor is a solid guy. To his credit, he went from a “D” rating with the NRA during his Congressional tenure to an “A” as Governor. He knows how to talk to people. He won by double-digits in his latest re-election. He balanced budgets and reduced massive budget deficits in his state. Because of his political efforts, Democrats are a dying breed in this swing of swing states. He even tried to enact the same collective bargaining reforms as Wisconsin Governor Scott Walker. He attempted to go further, and included the police and fire unions. Kasich’s plan backfired, and the same unions cobbled together an initiative and repealed the reforms. Once again: media messaging and timing matter.

Worse yet, Kasich is a Big Government cheerleader, from singing the praises of Common Core, to pushing for immigration “reform,” i.e. amnesty, including an unsound guest worker program. His worst offense? This Republican has pushed Obamacare all over the country, while talking up a Balanced Budget Amendment for the United States Constitution. Even more sickening, he wraps up his support for expansive federal programs under the guise of the Social Gospel: “God has a plan for you” he told inmates at a Utah prison. Does this divine plan require God using Caesar to plunder Peter and Paul?

The encroachment of the federal government into Americans’ health care is a massive invasion which no one can abide by. Think tanks have determined that if Kasich is the nominee – and even gets elected president – then Obamacare repeal is off the table. For many conservatives, for many Americans, that outcome is simply unacceptable.

In contrast to “Big Government” Kasich, there is Limited Government Unlimited with Texas Governor Rick Perry. The Brad Pitt of conservatives to many Republicans, Perry is pro-life, pro-gun, pro-marriage, anti-Common Core, anti-Obamacare, anti-amnesty, and very much pro-secure borders. For 14 years, Perry presided over the Lone Star State’s meteoric economic rise, low-tax and high-opportunity. Texas is everyone’s destination these days.

Perry 2012 flubbed in debates, and into defeat. Perry 2016’s entrance was uninspiring. Kasich stepped in late, but works the national media better. Even though Perry exceeds Kasich on many fronts, Kasich plays the media game, and gets first dibs in the debate. In politics, media messaging and timing matter, and conservatives need to embrace this fact, whether they like it or not.
Francis Collins: Children Under 12 Wearing Masks is 'Really Smart Thing to Do' and 'Sacrifice Worth Making'
Rebecca Downs