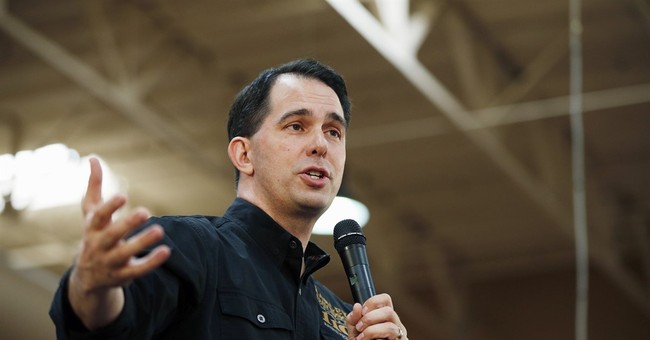 With Election 2016 underway, and the cadre of Republican candidates prepped for initial debates, the attacks against Wisconsin Gov. Scott Walker (R-WI) have not abated, and from the right opponents have faulted Walker for his stance on Common Core.

Wisconsin Gov. Scott Walker has a history of shifting his stated positions on the controversial Common Core standards and inviting the federal government into his state’s education policy plans. Experts say his current position, of allowing school districts to “opt-out” of Common Core, would not rid his state of the nationalized initiative. . .

Walker has been a critic of the Common Core Standards, and in late September, he told reporters he would like “Wisconsin have its own unique standards that I think can be higher than what’s been established.” However, according to the Associated Press, Walker has not committed to actually rescinding the standards.

To her credit, Berry identifies that his Democratic predecessor, Jim Doyle, adopted Common Core and initially sought the funding. Somewhat misleading, her statement “shifting” implies a lack of character, or an overdose of political calculation. For Walker, it was a recognition of facts. (For further history on Walker’s shift on Common Core, read here.) As for HuffPo’s argument that Walker did not want to remove the standards: that is patently untrue.

Granted, Walker signed onto Common Core’s implementation in his first budget. Critics forget his pressing political battles during his first two years in office: budget crises, collective bargaining reforms, unprecedented Democratic-Labor Union opposition, plus a recall effort in 2012. Clearly, he had other issues on his mind besides Common Core. After those victories, he announced his intentions to repeal Common Core.

Still that has not been enough for some critics. Before Walker’s Presidential campaign kick-off, Berry commented an open letter from Common Core opponents to Walker. Specific indictments included the following:

On April 20th of this year, you were directly asked during a major media interview if you would repeal Common Core . . . You replied affirmatively, adding, “Absolutely! I proposed it in my budget.”

Yet, contrary to claims you stand against the Common Core standards, you are effectively entrenching those standards in Wisconsin via Common Core-aligned, high-stakes assessments.

For months, you have justified taking no definitive action against Common Core, insisting that local school districts have the power to decide for themselves what standards they will use.

For the facts, consider his veto statement for the latest budget. The governor presented a budget which “[i]ncreases local control by affirming the authority of school districts to choose their own academic standards, provides a pathway to offering multiple student assessment options and prevents the mandatory application of the national Common Core Standards.”

Regarding a key veto, Walker explained:

This provision is unnecessary and would have codified assessment criteria in state law that are closely aligned with national standards I oppose and which local school districts should not be mandated to adopt. Ultimately, local school boards across Wisconsin should be able to determine what test they administer and what standards they adopt.

In Wisconsin, the governor can adjust or remove funding regarding standards, but he has no control over district decisions on the matter. The Governor does not have ultimate authority over the educational standards in local-control Wisconsin. Conservatives have excoriated President Obama for his unconstitutional executive overreach. Walker respects school districts and constitutional rule, and yet partisans cry “Walker the RINO!” In Wisconsin’s statutes and the state Constitution, partisans will find plenty to affirm Walker’s limited power on dealing with Common Core implementation in local schools. Legal precedent established this in Thompson v. Craney:

Since Wisconsin achieved statehood in 1848, the administration at the state level of public education in Wisconsin has been the duty of the Superintendent of Public Instruction, who is elected in a non-partisan statewide election pursuant to Article X, § 1 of the Wisconsin Constitution.

Wisconsin state law clearly outlines the state superintendent’s final authority on curriculum. Despite legal realities, Common Core critics expect Walker to stand before the cameras every day and preach the evils of the curriculum (and indeed, there are plenty). However, even if he talked about it at speaking engagements every day, and removed all statewide testing aligned with the nationalized standards, Wisconsin schools districts must adopt the responsibility and adapt their own standards.

As a dedicated constitutional conservative, Walker expanded school choice, vouchers, welfare-to-work programs, froze state college tuition, and removed tenure for college faculty: an impressive array of accomplishments for a red-state governor in a blue state. With his limited, legal resources, Walker pushed for the repeal of Common Core, has affirmed the power of local control in school districts, and vetoed provisions in his budget which would upend his opposition to the unpopular curriculum. Walker made the right decision, opposing its implementation respecting local control. Conservatives have blasted Obama for his executive overreach at the federal level, yet his critics want him to do the same regarding education? Frankly, opponents of Common Core in Wisconsin, as well as around the country, need to stop “Waiting for Superman” and take the fight to their school boards.

Besides, even if one wants to believe the snide, worst-case scenario about Walker and Common Core, National Review’s Ian Tuttle presented the following pithy and positive political appraisal:

[I]f Walker has a Common Core problem, he also has (for the moment, at least) this small advantage over his opponents: A large swath of likely Republican primary voters view him as the strongest alternative to Jeb Bush and the Republican “establishment.” He has a grassroots brand (as opposed to Christie), national viability (as opposed to Huckabee), gubernatorial experience (as opposed to Rand Paul and Marco Rubio), and electoral success in a purple state (as opposed to Rick Perry). And that may be enough for voters to give his conversion the benefit of the doubt.

The analysis above should lend further benefit to these doubt.