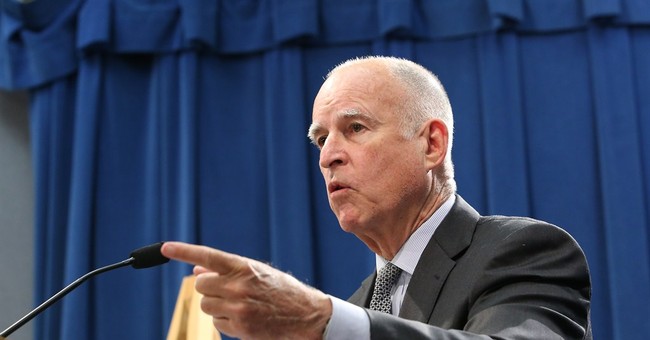 From the Golden State to a glistered mess of unconstitutional anarchy, complete with insecure residents and unsecure borders, California’s Governor Jerry Brown has turned his state into a browned out dystopia, where farmers and families have no water, and where citizenship has turned into a hollow phrase. Worse yet, the state legislature has become a willing rubber stamp for turning California into a sanctuary state for illegal aliens. This past week, the state senate passed SB 4, legislation which would provide taxpayer-funded health insurance to illegal aliens.

The bill would allow up to 240,000 minors to sign up for Medi-Cal and allow some low-income adults to sign up for a separate program that provides the same services. Higher-income people would be able to buy non-subsidized coverage through Covered California if the federal government provides permission for them to do so.

Sen. Jeff Stone (R-Murrieta) said the legislation only makes worse a shortage of physicians to treat patients on Medi-Cal. “This bill would only add hundreds of thousands of patients to the rolls with no one to care for them.”

The state legislature wants to insure illegal aliens, even though Californians are struggling to make ends meet, and many of them cannot afford health insurance. The standard-bearer of Obamacare state exchanges, Covered California, is getting uncovered as a massive failure. California’s medical professionals either refuse to participate in the state exchange, and/or they are demanding high reimbursements from Medi-Cal (the state’s Medicare program).

Despite the financial crises in California’s homes and doctor’s offices, every state senate Democrat – and two Republicans! -- supported SB 4, pandering to illegal aliens at the expense (literally and figuratively) of everyone else. Heading over to the state assembly, this bill will face hopefully more populist pressure will prevail against this law.

Unfortunately, this latest hand-out to illegal aliens in the state of California is not the first, and may not be the last with Governor Brown at the helm and his denizen of liberal Democrats still dominating the legislature. Without stating as much, Brown is transforming California into a sanctuary state, rebuffing the rights of citizens and his responsibilities as governor.

Within months of his third term as Governor, Brown signed off on California’s own DREAM Act, even though a majority of Californians rejected in-state tuition for illegal residents. American citizens still have to pay the out-of-state tuition.

In 2013, the state supreme court, with the blessings of the governor, allowed illegal immigrant Sergio Garcia to receive a bar license to practice law. In other words, an illegal legal counsel can give legal advice to illegals. Is anyone confused yet? CNN’s Robert Navarrette sure was.

Still, Governor Moonbeam and the Sacramento Democratic amnesty agenda have grown more brazen. In 2003, voters had pushed back and forced Sacramento lawmakers to repeal driver’s licenses for illegal aliens. Ten years later, and the legislature passed the law again, and Brown happily signed off, with no blowback (yet) from California residents. DMVs throughout the state rushed to accommodate the measure, even though a startling number cannot pass the tests, and more legal residents must wait in longer lines.

This latest move to welcome more illegal immigration, should come as no surprise, however, since Governor Brown in 2014, during an election year no less, practically threw out the welcome mat to illegal immigrants.

The Los Angeles Times presented a fitting, if unfit, title:

Jerry Brown: Immigrants, legal or not, ‘welcome in California’

With brash aplomb, and more unconstitutional flair than President Obama, Governor Brown practically threw a housewarming party for illegal aliens. What about the rest of us Californians, you know, those born or naturalized, who have rights because we are...citizens? Are we welcome here still?

I am the son of immigrants. I think that immigration adds tremendous value to our country. And immigration is very personal for me. . . My heart goes out to kids around the world. . .But the solution to the world's suffering kids is not an open border in America.

While discussing the need for education reform, Kashkari’s other remarkable remarks just as well applied to the immigration issue:

I would add: who is going to stand up for all legal residents in this state? Don’t they count? With all the attention and support from the state legislature, it pays to be an illegal alien in California nowadays.

With all the gimmicks and gimmes for illegal aliens, perhaps California residents should start renouncing their citizenship and become illegal residents themselves. Some California residents did something similar, and stormed the Mexican consulate demanding government benefits. Other California residents have focused more on engagement and enforcement. Enraged at President Obama’s executive amnesty, American protesters crashed a session at USC promoting Obama’s unconstitutional amnesty, then chased away its chief spokesman, Congressman Luis Gutierrez. Despite the media press claiming otherwise, even California’s Hispanic population is growing wary (and weary) of illegal immigration.

Still, small efforts have not proved effective, and Brown’s Welcome Mat has attracted more mass migration at the expense of everyone else. California is turning brown with drought, and Governor Brown and the Democratic Sacramento political class are making the state poorer with handouts to illegal aliens.

Americans in the Golden State and around the country should shout “Sanctuary!” for California’s legal residents and demand and end to this illegal, illiberal amnesty pandering. We the People cannot afford it.
More Evidence: Yes, Critical Race Theory is Being Taught in Virginia Schools, Despite McAuliffe's Lie
Guy Benson
Facing Multiple Crises, Gavin Newsom Bans... Gas Lawn Mowers?
Spencer Brown
So, We're Just Going to Ignore a Bunch of Green Warriors Who Tried to Storm the Department of the Interior?
Matt Vespa
Marine Who Criticized Disastrous Afghanistan Exit Has Been Handed His Sentence
Leah Barkoukis