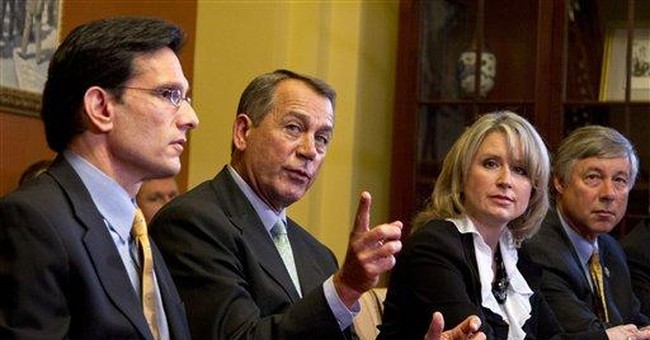 This week, I was getting minute by minute reports from an Alabama conservative reporting on the House passage of HR 7, which would defend the unborn by defunding Planned Parenthood, barring taxpayer funds for abortions.

This welcome passage coincides with the 42nd Anniversary of Roe v. Wade, a disastrous legal decision which took the power of life and liberty away from the mother, the unborn child, in many instances the father, and the fostering of local communities. Liberal and conservative jurists have blasted that decision, arguing against its poor legal logic and its one-size-fits-all judicial activism.

After later reports, I learned that the House conference wanted to pass a bill to ban abortions after twenty weeks, except in the cases of rape, incest, or the life of the mother. Yet the bill was pulled at the last minute, sending fearful shockwaves throughout the conservative blogosphere and right-wing intelligentsia.

One of the most alarming headlines read:

While the article highlights the last-minute pulling of this bill, the overreaction beating out in the hyperventilated rhetoric needs some tempering.

First of all, Democrats have been the minority in the House since 2010, having lost their majority after only two election cycles. Their forced passage of the Patient Protection and Affordable Care Act forced out sixty Democrats. In case anyone has been paying attention, the Democrats have their leanest minority caucus since the 1930s. Add to that the 70% of state legislatures controlled by Republicans, plus the comprehensive gerrymandering after the 2010 shellacking, and Republicans are pretty much destined to hold the House Majority well into the next decade.

Second of all, Democrats as a brief majority party were hardly the model of partisan unity. Cap and Trade passed by the slimmest of margins in 2009, then died in the supermajority Democratic US Senate. Two dozen Democrats defected and voted against the ACA in 2010, and after that, minority leader Nancy Pelosi witnessed her caucus disappear, dwindle into insignificance, or defect to the Republicans on key issues. During the 2013 government shutdown, Democrats began voting with Republicans to repeal key portions of the offensive Obamacare, as well as fund the government piecemeal. Even “Crazy Black Lady” Maxine Waters has had to play nice with conservatives.

The diminishing mainstream media will scream with preening vanity every time Republicans make a mistake. This time, however, the countermedia and local conservatives are pushing aside this biased narrative. Take a deep breath, everyone: the myth of a fractured and vastly incompetent GOP caucus is greatly exaggerated. No need to think of a happy place. We are already in one.

However, what caused an otherwise near-certain bill to get pulled at the last minute? Tony Perkins of the Family Research indicted two key Republican lawmakers, Renee Ellmers and Jackie Walorski (R-Indiana), both into their third terms in Congress, and both starting to fray on key issues. Both had supported the full provisions of the Pain-Capable Unborn Child Protection Act (PCUCP) in 2013, but reneged on their support this time. Congresswoman Ellmers (R-NC) was already wobbling on this bill, and threatened to take with her key votes for passage. Wanting to present a clear veneer of unity, Republican leaders pulled the bill.

The fault, dear readers, lies not with House Leaders. Ellmers and Co. aborted a popular abortion restriction bill because of concerns about the reporting requirements for an individual mother who seeks an abortion because of rape or incest. Yet they had supported the same bill two years ago, with that provision included.

Time to panic? Soaring elephants now tripping on their trunks? No way.

First, the House GOP conference will have another chance to pass PCUCP. Second, the No Taxpayer Funding of Abortion Act unites even fiscally conservative yet socially liberal types, since no one with any fiscal restraint would support funding abortions with taxpayer dollars. Want to kill a baby? Do it with your money, not mine.

Third, the stronger, conservative tone of Washington is making it easier to identify then remove the Republican squishes who have weakened their colleagues' hand on certain causes. Ellmers has proven to be an unwelcome, and now unnecessary thorn in the Republican conference, and the conservative cause. She has relentlessly pressed for immigration "reform", as well as caving on the life issue. She backed away from backing North Carolina's gay marriage ban. About her female colleagues Ellmers quipped:

We need our male colleagues to understand that if you can bring it down to a woman’s level and what everything that she is balancing in her life – that’s the way to go.

In other words: "Women are too stupid to understand all that complicated man-talk." Really?

This "abortion fiasco" strengthens Republicans as they abort unhelpful members. Ellmers is the female Eric Cantor: pro-Establishment, anti-conservative base, pro-amnesty, and unwelcome. She faced fierce primary challenges from the right in two election cycles, and in her latest reelection, she faced off against the hapless, laughable self-parody Clay Aiken. In 2016, she will no doubt get thrown out in the face of a unified opposition.