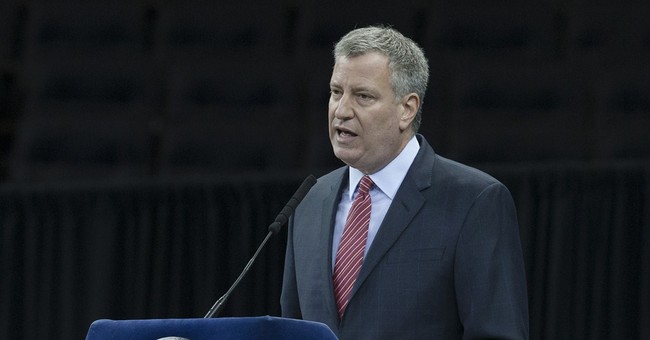 The current Mayor of New York City, Bill de Blasio, is a closet communist to the most ardent of critics. Compelling evidence (even From the New York Times!) about his past lends significant credence to this allegation. To conservatives like Washington Post’s George Will, he is a blessing in disguise, exposing New Yorkers to unfettered progressive principles, and their consequences. Nothing inoculates voters better to the dangers of abject liberalism than a heavy dose of it, Will quipped.

Enter Mayor Blah-Blah, the most ardent of advocates for left-wing policies.

De Blasio pledged to fund and expand Planned Parenthood in New York City: abortionist to the extreme. He supports universal pre-school, and the unionization of pre-K teachers, and thus the Democratic funding and support sure to follow. Kill the kids, but unionize their state-sponsored schooling from cradle to grave should they survive.

A fierce opponent of charter schools and school choice, De Blasio swiftly declared a moratorium on charter schools, and undercut their funding in New York City. The greatest backlash came not from the right, nor from school choice conservatives, but fellow liberal Democrat Cuomo and minority advocates for inner city youth.

An animal advocate at the expense of commerce and community, De Blasio ran for mayor pledging to ban horse-drawn carriages for Central Park. As for Staten Island Chuck, however, the furry rodent predicted not only six more weeks of winter, but met his untimely demise at the inadvertent hands of the uber-Leftist de Blasio. Everything that liberal mayor touches gets polarized, politicized, or perishes.

Which may include his tenure in office. Even liberal Al Roker offered his own cynical prediction: “Forecast: One Term” for De Blasio following his heedless decision to force New York City kids to go to school in the heaviest and harshest of snow storms (plus delaying snow plows in hard-hit sections of Manhattan).

Yet in the latest rout of this radical mayor’s reputation in the Big Apple, De Blasio has been an unwavering advocate of the criminal element in New York City at the expense of the victim, the community, and even the police. De Blasio rallied liberal support for his campaign when he pledged to stop Stop-and-Frisk, even though he appointed the law-and-order success Bill Bratton back from Los Angeles to his home.

Now the NYPD is under attack, and they blame the actions (not necessarily the rhetoric) of Mayor Blah-Blah. Two police officers, Rafael Ramos and Wenjian Liu, were gunned down in executioner style in the final weeks of 2014. The lone attacker claimed the murders as payback for Michael Brown, Eric Garner, and all African-Americans brought down by “The Man”.

In spite of his strongest plaints on behalf of the police, including increased funding and resources, the NYPD are fed up with De Blasio.

One of the main complaints from the NYPD with the Mayor of NYC? He is an active apologist for professional race-baiter “Reverend” Al Sharpton, the aggravating community organizer of crowds chanting “What do we want? Dead Cops!” :

The more people criticize him, the more I want to hang out with him.

The NYPD criticize Mayor De Blasio in word and deed, turning their backs to him during his eulogy for the two officers. (Adding insult to misery, the mayor had arrived hours lateto the service). Interspersing a NYPD graduation commencement speech with Biblical quotes of peace, the mayor met boos, as police continue their public affront. Not helping matters, he re-appointed a judge severely derided by the New York Post as a “set-em-free” judge who let cop haters go free. The police do not want to hang out with this guy. Instead, they fly banners repudiating Mayor Blah-Blah: “De Blasio, Our Backs Have Turned To You” and “De Blasio, apologize to the NYPD!!”

Recent reports now suggest that De Blasio networked with public officials to criticize the police for their ill treatment :

"City Hall wanted me to blast the Patrolmen’s Benevolent Association for turning their backs on him," one legislator [shared]. "They ... said they were calling all of us, and that it was our obligation to stand up defending the mayor." The legislator described the tenor of the call as being "because they were calling that we should do whatever they ask."

From rising tensions among police leaders, to public rebukes from police officers, to sharp decreases in arrests following the savage assassination of two peace officers, NYC Mayor Bill De Blasio has more than his fair share of NYPD blahs, and has only himself to blame. His blasé tenure in New York City may renew hope that the Empire State is putting its ultra-liberal days behind herself.