Dr. Carson Deserves an Up or Down Full Senate Vote

Armstrong Williams
|
Posted: Feb 21, 2017 10:44 AM
Share   Tweet
The opinions expressed by columnists are their own and do not necessarily represent the views of Townhall.com. 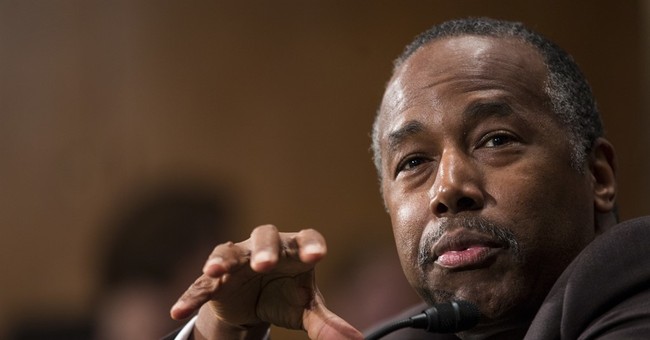 On any given day in New York, there are more homeless adults than fans at a sold out game in Yankee Stadium; more homeless children than attendees at a packed to capacity Madison Square Garden event. Then there are those on the precipice. Twenty million American families pay more than half their income on housing, forced to make toxic trade-offs like medicine for a sick child or nutritious food for the household. We are in the midst of a housing crisis. One would think that Senate Democrats would move urgently to confirm the necessary leadership of the federal department which has the responsibility of addressing this shameful situation.

Instead the nominee for Secretary of Housing and Urban Development, Dr. Ben Carson, is held hostage to a partisan strategy of gridlock and delay. It's not as though Carson hasn't been thoroughly vetted by Senate Democrats. Or that they have expressed substantive reasons to oppose his nomination. Prior to his confirmation hearing before the Senate Banking Committee over one month ago, the nominee spent days visiting with committee members from both parties - even though he only needed the votes of the majority - answering questions and demonstrating respect for their important role in confirming presidential nominees. At the hearing, Dr. Carson patiently and thoroughly answered questions by Democrats and Republicans for hours. Not a single Democrat announced their opposition and on January 24th every Democrat on the committee, including leading progressives like Elizabeth Warren and Sherrod Brown voiced their support for him through a unanimous voice vote of approval.

Yet the Democratic leadership refuses to follow the lead of the key committee and allow an up or down vote by the full Senate. This, even though some of their most vocal critics of President Trump support Carson. The losers aren't the politicians; they are the poorest among us who depend on stable leadership by the federal government to provide critical housing assistance. For weeks now, the 8500 HUD employees have gone without a leader. As the $48 billion a year department drifts, important challenges go unmet and lives become negatively impacted. Senate Democratic leadership is sabotaging the ability of HUD to play a meaningful role in the lives of our least well off neighbors.

The reason that Carson is being held up is because he is collateral damage to a larger political game that is playing out in Washington. Senate Democrats are angry with Trump about decisions that have nothing to do with HUD or housing: executive orders on immigration, the Keystone pipeline and other matters. They seek retribution for the fact that President Obama's Supreme Court nominee didn't receive a hearing. They're frustrated that Harry Reid's nuclear option, which dismantled the filibuster tradition, has backfired on them. And so they are flaying about trying to make a point about relevance that nobody but them understands. They misinterpret anger for a strategy.

What has happened to bring us to this point? Increasingly the brittle partisanship and resulting political strategies are making America ungovernable. Democrats seem to be saying that the new standard is that the nominees must agree with them on every issue to deserve an up or down vote. Answer my questions satisfactorily? Doesn't matter. Commit to work with me on issues I care about? So what? Have a stellar record? Big deal!

Americans want government to work. They understand checks and balances. They accept that opposing parties will have disagreements. But we have descended to a place where the rallying cry seems to be we will do anything we can to stop the president from staffing his administration with the talent who will help him govern. There is some irony here. During the Obama administration, many congressional Democrats complained bitterly that Republicans were willing to shut down the federal government to win budgetary concessions. Yet what is it that Senate Democrats are now doing? By blocking, delaying and boycotting top nominees like Ben Carson they seek to grind the new administration to a halt. Is this really who they want to be?

Ben Carson is an unlikely nominee to face this obstruction. He grew up in poverty in inner city Detroit. Born to a teenage mother, he has first person knowledge of the racial challenges, disadvantages and suffering that are all too common to the folks who depend on the federal agency he seeks to lead. Through talent and determination he became a rock star in the field of medicine, becoming the head of pediatric neurosurgery at famed Johns Hopkins Medical Center at 33 years old and completing a number of groundbreaking firsts in his field. He is soft spoken and intellectual. During the confirmation hearing he pledged to strongly support the mission of HUD, and clearly impressed committee Democrats with his passion and knowledge of the connections between health and housing, particularly involving lead-based paint. He expressed his support for the vigorous enforcement of the Fair Housing Act, saying that he believed that it was among the most important elements of the Civil Rights Act. Bill Clinton's Housing Secretary, Henry Cisneros, joined several other former HUD Secretaries in a letter urging a confirmation. In short, if Carson was a nominee by a Democratic president, those same committee members would have cheered him.

It's time to stop the partisan obstruction and allow for a proper up or down vote for Ben Carson. If some Democrats want to go on record opposing the president's choice they have the option to vote against confirming him. But Democratic leadership should have enough respect for the mission of housing, for the agency that is charged with serving that mission, and for the hardships caused by a growing housing affordability crisis, to permit its members to vote their conscience. And without doubt the conscience vote is one to confirm Dr. Ben Carson.