Fear, Loathing and Moral Decay In the Streets of Baltimore 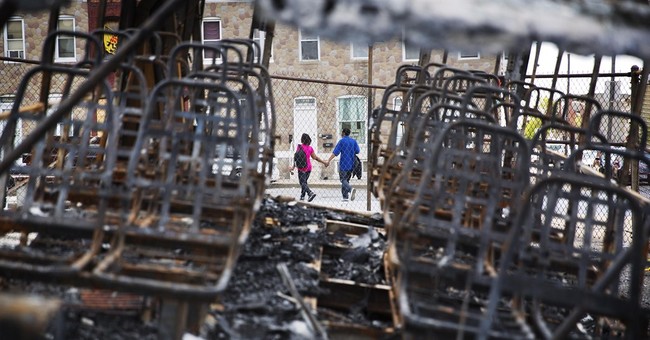 Let’s face it. Baltimore has been a-riot for decades, and was looted long before its citizens finally rose up in glaring sad and pathetic anger before the global media world this week over the still unexplained death of Freddy Gray in police custody. While the cops try and get their story straight, the citizens have taken to the street in a largely symbolic display of outrage, burning a few cars and torching a few businesses in a city that for all intents and purposes is already too burnt-out to really destroy.

Against a veneer of development along its harbor, Camden Yards, and a few blocks of recently developed homes around the ball park, the city has large swaths of broken down homes and vacant lots. The roiling speculation of the 2000’s left the city almost half rebuilt, with islands of development surrounded by a vast sea of urban blight. The new residents, many of them refugees from the rapid gentrification of Washington and its precipitous housing costs, have started circling the wagons like settlers in some distant and hostile outpost at the edge of the known world.

Baltimore’s native inhabitants have to a certain degree hardened to the decay. The public schools are so deplorable that they in themselves should be declared a national emergency of almost genocidal proportions. The city’s beleaguered police force has been subject to dozens of police abuse cases in the past decade, and the city has paid out settlements in the tens of millions to citizens due to rampant police corruption and incompetence. A major scandal in the city’s jail – in which an imprisoned gang member reportedly impregnated at least four female corrections officers -- revealed that the inmates truly do run the asylum in that city.

And so, against the backdrop of corruption an ineptitude, it is no wonder that the city chose to play it loose with its enforcement of curfews and combatting the looting and lawlessness of the rogue groups of protestors.

The Mayors’ statement that she would give looters “space to destroy stuff” seems almost par for the course in a city in which the leadership has been so bankrupt that it cannot even muster the moral authority to enforce the law in a time of crisis. Were it not such a sad indictment of the state of affairs in the city in general – a city in which each day gangs of teenagers on stolen motorbikes (known as the “12 o’clock boys because their skill at performing extreme willies) run roughshod over the hapless police – it would actually merit outrage and criticism. But this is Baltimore we are talking about, and so disbelief and moral indignation all too often give way to a muted resentment and a pretense of normality just to keep from starting a useless argument.

One iconic image arose out of the fog though. Television cameras streaming live from the scene caught a mother (who herself had been watching the news and saw her child rioting) drag her rock-throwing child out of the melee and beat him back until he turned and fled away from the scene amid a fierce downpour of smacks and punches. The liberal media tried to ignore it, but the image was too stark a reminder of the challenge Parents’ face in trying to raise children in amid the chaos and dysfunction that has characterized the city for the past several decades. Were it not for this special situation however, the liberal media would not doubt be calling for the woman’s head for using corporal punishment in an effort to discipline her son. But here in stark contrast of a son dressed in black and facing a wall of well-armed riot police, the mother truly seemed to be at the end of her rope, desperately trying to prevent her son from suffering imminent harm or even death. One questions why parents need to discipline their children in advance: to prevent worse harm from occurring down the line. That’s common sense, especially in a situation in which harm lurks to close and can strike so suddenly.

But more than anything the decades of decay in Baltimore and other inner city enclaves that have been traditionally progressive liberal strongholds sheds a ghoulish light on the progressive era’s crowning achievement – the Presidency of Barack Obama. How could any of this happen under his and attorney general Eric Holder’s watch? It makes for amusing television when liberal pundits try and squirm out of the obvious situation here – the Obama administration has done less than any other recent administration to address the root causes and symptoms of urban despair.

In fact, despite a full recovery on Wall Street and overall employment levels having returned to pre-recession levels – these inner city communities have found themselves displaced, with entrenched and unflinching unemployment, skyrocketing housing costs due to gentrification, and rapidly receding public services. They are up the creek, so-to-speak, without a paddle and being swiftly drawn along the rapids to impending watershed moments such as those we have continually faced – whether in Baltimore or Ferguson or that liberal bastion of benevolence, New York City. Or in Cleveland, or in Los Angeles, or in San Francisco. Take your pick, in all these places the liberal experiment is failing badly.

It may be past time that black and inner city residents rethink their strategy of putting all their eggs in the Democrats basket. Because when it comes down to the come down, they won’t be there.