A Fictional Conversation Between President Obama and Justice Clarence Thomas 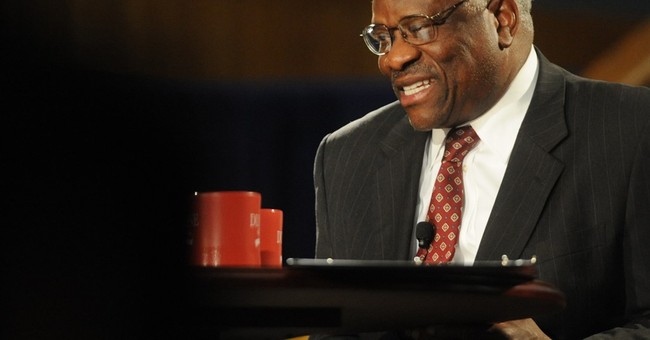 Never before in America’s history have three black men occupied such official positions of power: President Barack Obama, Attorney General Eric Holder, and Supreme Court Justice Clarence Thomas. Given that Mr. Holder as Attorney General has been an integral member of the President’s cabinet over his two presidential terms, one assumes they speak often and concur to a certain extent in their philosophical outlooks. However, what would be far more intriguing is a conversation between President Obama and Justice Thomas. Here are two individuals who are seemingly polar opposites on the political spectrum, but at the same time in important ways represent the fruits of a great turning point in America’s racial saga.

What would the two distinguished men discuss, and what tone would their conversation take? Given that they are both leaders of their respective branches of the co-equal triumvirate (the executive, judicial and legislative) constituting our government, would either dare tread upon the territory of the other? Both are lawyers after all, and each graduated from the top law schools of the country: Harvard and Yale. Alas, we do not have a fly-shaped drone on the wall listening in. But if we did, here is what we might overhear….

Thomas: Hello Mr. President, very thoughtful of you to drop in on us this afternoon. We haven’t had a sitting President drop by the Court for some time now.

Obama: Thank you Justice, I just happened to be back from a lunch on the hill and thought I’d stop in. I’ve always admired the serenity and dignity of the court, and with partisan politics raging all around Washington these days, I thought a visit among the cooler heads around here might provide a bit of a respite.

Thomas: Well, thank you for saying that. I’ve always said that heated passion has a way of gumming up the wheels of justice. And while the wheelers and dealers down at the Capitol might think this approach rather ‘monastic’ we find that cooler brains tend to yield clearer and more accurate answers to some of the more pressing questions.

Obama: You know I’ve always admired that cerebral approach a lot. As President of the law review we often had to get down in the weeds and tease out tough legal issues. And I admired the exactitude and rigor of the approach. Obviously as President of the Law Review I had a greater role in managing the institution than actually sitting down and writing the briefs.

Thomas: Yes, it does take a certain single-mindedness to avoid getting caught up in the fray. Often I think in the rush to try and correct perceived injustice, policymakers often tread right over legal principles that were put in place to protect the American people against those very overreaches. Getting the right result counts, but getting to the right result by the right means counts just as much if not more.

Obama: Well, I am all for process and procedure, but I don’t hold myself hostage to it. After all, the executive authorities, courts and legislatures at all levels – local, state and federal – have all got it glaringly wrong over the course of American history. I think we can go back to slavery and the civil war – the laws and jurisprudence that came out of that process led to results that caused great injustice to many, many Americans. And so we have to realize that there are practical realities on the ground that the Constitution is sometimes ill-equipped to handle.

Thomas: Well, well Mr. President, That is precisely why you ran for President and I was selected for the Court. At the end of the day, when disputes arise about what the government should do, or how disagreements should be mediated, there has to be a guiding document. It can’t just be up to the whims and preferences of judges. As I’m sure you can imagine that would lead us down a dark road from which it would be difficult if not impossible to return.

Obama: That’s really heady stuff, Justice. I think we start with basic principles as set forth in the founding documents – the Constitution, the Bill of Rights and the Declaration of Independence – and as time evolves, Judges must try to adhere to the spirit of the law where the letter is left wanting. That is, we embrace the fact that as a society we are evolving, and we infuse that living, growing spirit into our jurisprudence. And after all Justice, you’ve been known to write some pretty radical opinions – like your concurrence in Citizens United – that seem to do away with decades of well-settled Constitutional jurisprudence.

Thomas: You know that’s where you and I are going to differ, Mr. President. You see the Constitution as a living document, and I see it as the source of life, a bedrock foundation which does not change with the winds or the whims or the latest fashion. But you are not alone in this, unfortunately. Over the past fifty years or so since the civil rights movement, its’ become quite fashionable for judges to read into the law a host of wishes that are simply not there. And to address your comment about the Citizens United case, if you look back through my opinions you’ll find a consistent theme: I’m not afraid to peel back ‘judicial creep’ – judge-made law in preceding cases that began the inexorable drift away from what the Founding Fathers intended. In fact, I often feel my principal job on the Court is to peel back the barnacles that have grown over the hull of the Constitutional jurisprudence over the years…..

Obama: I would hardly characterize the election laws protecting the voting rights of citizens against concentrated money as “barnacles…”, you seem to miss the…

Thomas: Let me interrupt you Mr. President because, you are characterizing Citizens United as an electioneering case, when in actuality it is a First Amendment case. And you’ve been known over the years to wax eloquent about the free speech being the cornerstone of a true democracy. Well, here you have it all nicely tied up for you – with this ruling everyone’s able to speak more freely.

Obama: Well I don’t know about that. Certainly I don’t know that ‘corporations’ count as ‘people’ for first Amendment purposes. And moreover, it seems to me a bit inconsistent to remove from the government right to regulate elections on the basis of ‘individual’ rights, and then to go about eviscerating the Voting Rights Act under a collective rights (states’ rights)framework as the court did in Shelby vs. Holder. While I agree that some rights, such as Second Amendment rights should be read to apply ‘collectively,’ I don’t really see the consistency in your treatment of either individual or collective rights like states’ rights.

And so the President and the Justice would go on for hours, each enjoying the others’ intellectual abilities, and speaking in pleasant and respectful tones, but neither giving an inch. And at the end of the meeting, they would issue glowing and effusive praise for the others’ better half before sailing off again, like two ships in the night, never to meet again on that vast ocean of differences that can separate those who in actuality live just across the street from one another.