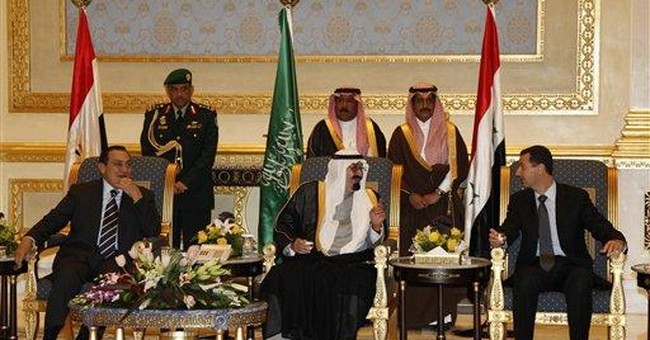 President Obama has talked the talk on our nation’s energy independence, identifying it at the top of his big three immediate fixes. But in recent days, a series of pivotal developments in the Middle East show that Obama is painfully ignorant of what this country needs and what we need now. I refer to oil interruption that may be triggered by a pre-emptive move by either Tehran or Jerusalem over Iran’s fast-paced nuclear program.

Edwin Black, in his recent book The Plan--How to Rescue Society When the Oil Stops--or Before, sat down with me recently outlining the looming crisis and a plan to save the country which can be immobilized within weeks by an oil interruption. But no one in government has paid attention other than nail-biting oil crisis monitors at the Department of Energy.

Here’s what happened in recent days to change the game and make us closer to a cataclysmic confrontation with dire consequences for American oil that the Obama administration is completely unprepared for.

Second, days ago, the International Atomic Energy Agency conceded it has underestimated Iran’s nuclear stockpile by about one-third. Iran now wields 2,227 pounds of nuclear material. Its stockpile includes approximately 700 kilograms of the Uranium 235 isotope needed to make at least one bomb.

Third, Iran has accelerated enrichment with thousands of new, highly advanced centrifuges. They want 6,000 centrifuges to speed the enrichment of weapons grade material. More than 5,400 centrifuges are now spinning, including 164 new homegrown IR-2 and IR-3 models. The new Iranian centrifuges are faster than imported P-2 devices. Washington circles are now convinced that Iran, regardless of protesting too much, is in fact racing toward a deliverable nuclear weapon. As for the CIA’s much-questioned 2008 National Intelligence Estimate that concluded Iran was not pursuing nuclear weaponry, that dubious document has now been discarded as flawed.

Fourth, Benjamin Netanyahu has just become Prime Minister of Israel. He promises action before Iran can achieve its nuclear threat. Israel’s Military Intelligence Maj.Gen. Amos Yadlin this week confirmed that Iran has now crossed the technology threshold needed to weaponize. The situation is hair-triggered as Israel and Iran both contemplate pre-emptive action. Therefore, during the past three weeks, the military endgame has become drastically closer.

Hillary Clinton’s recent “listening tour” to the Mideast was a great “photo op and a noble beginning with lots of mixed messages, but did nothing to decelerate the Iran nuke crisis.

Yes, Israel continues a massive game of global equipment sabotage, assassinations of Iranian scientists, and diplomacy. But it is not working and Israel is wondering how long it can wait. Days? Weeks? Months?

Remember, Tehran’s nuclear partner is Moscow. Russia has provided almost all of the nuclear material for the Bushehr nuclear reactor, along with thousands of technicians. President Vladimir Putin decided to deliver the final phases of the S-300 advanced air defense system which can track scores of Israeli airborne intruders simultaneously and knock them down. The S-300 will not be fully operational for several months. A nervous and narrow window exists for Israel’s forces to act. Sensing this, Moscow just quietly agreed to pause missile deliveries to Iran fearing it would only accelerate an Israeli attack.

President Ahmadinejad incessantly promises to counter or preempt any Israeli move by shutting the Strait of Hormuz, and destroying the indispensable Ras Tanura gulf oil terminal and the Saudi oil facility at Abqaiq. Tehran can easily achieve this by missile or bomber. According to author Black, any of these three moves would immediately stop 40 percent of all sea borne oil, 18 percent of global oil, and some 20 percent of America’s daily needs.

Low gas prices are irrelevant to an oil interruption. If it stops, it stops—at any price. Pump prices would become astronomical. Russia and Saudi Arabia would love to see pump prices zoom to more than $15 per gallon. That would make economic recovery completely impossible. No one could even afford the gas to look for work. America would be forced to go to war.

Actually, America has dangerously increased its oil vulnerability because of oil’s precipitous drop to about $35 per barrel. Canada, supplying about ten percent of our 20 million barrel daily use, requires $70 per barrel of oil to produce. At $35, much of Canada’s fast expansion has been shut down. America’s strategic petroleum reserve carries only two months worth of unrefined oil. According to The Plan, a protracted interruption would throw us into a Mad Max scenario.

Yet the Obama administration has developed no contingency plan. What must it do? To survive, America must retrofit much of its 250 million gas guzzling vehicles along with a surge of alt fuels. We have the compressed natural gas (CNG), hydrogen, electric, biofuel, non-agrifuel ethanol, methanol and other alt fuel technology right here right now.

We can compel Detroit to convert and retrofit now. We must lift EPA sanctions against converting vehicles off oil. Take some of those billions, Mr. President, and help this country survive both its economic and petro political vulnerability. In other words, get a plan.