So Much for Wise Latinas 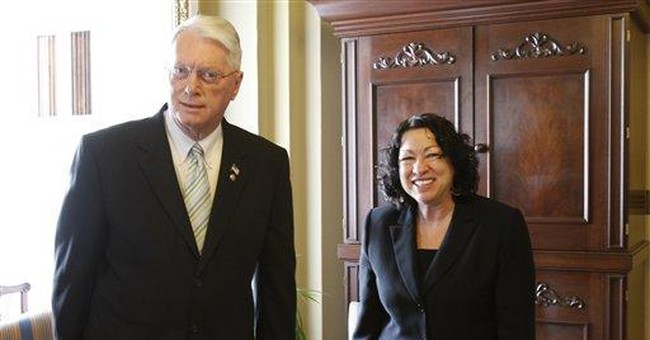 With the Supreme Court's decision in Ricci v. DeStefano this week, we can now report that Sonia Sotomayor is even crazier than Ruth Bader Ginsburg.

To recap the famous Ricci case, in 2003, the city of New Haven threw out the results of a firefighters' test -- which had been expressly designed to be race-neutral -- because only whites and Hispanics scored high enough to receive immediate promotions, whereas blacks who took the test did well enough only to be eligible for promotions down the line.

Inasmuch as the high-scoring white and Hispanic firemen were denied promotions solely because of their race, they sued the city for race discrimination.

Obama's Justice-designate Sotomayor threw out their lawsuit in a sneaky, unsigned opinion -- the judicial equivalent of "talk to the hand." She upheld the city's race discrimination against white and Hispanic firemen on the grounds that the test had a "disparate impact" on blacks, meaning that it failed to promote some magical percentage of blacks.

This strict quota regime was dressed up by the city -- and by Sotomayor's opinion -- as a reasonable reaction to the threat of lawsuits by blacks who were not promoted.

That's a complicated way of saying: Racial quotas are peachy.

According to Sotomayor, any test that gets the numbers wrong -- whatever "wrong" means in any given context of professions, populations, applicants, workers, etc. -- is grounds for a lawsuit, which in turn, is grounds for an employer to engage in race discrimination against disfavored racial groups, such as white men.

Consequently, the only legal avenue available to employers under Sotomayor's ruling is always to impose strict racial quotas in making hiring and promotion decisions.

Say, if the threat of a lawsuit permits the government to ignore the Constitution, can pro-lifers get New Haven to shut down all abortion clinics by threatening to sue them? There's no question but that abortion clinics have a "disparate impact" on black babies.

This week, the Supreme Court ruled 5-4 for the white and Hispanic firefighters, overturning Sotomayor's endorsement of racial quotas.

But all nine justices rejected Sotomayor's holding that different test results alone give the government a green light to engage in race discrimination. Even Justice Ginsburg's opinion for the dissent clearly stated that "an employer could not cast aside a selection method based on a statistical disparity alone."

Indeed, the dissenters argued that the case should be returned to the lower courts to look for some hidden racial bias in the test. For Sotomayor, the results alone proved racial bias.

The one advantage Sotomayor's talk-to-the-hand opinion has over Justice Ginsburg's prolix dissent is that brevity prevented Sotomayor from having to explain why quotas aren't quotas.

That was left to Ginsburg.

But they can't say that, so instead they talk in circles for 10 hours straight, until everyone else is exhausted, and then, when no one is paying attention, they announce: So we're all agreed -- we will have racial quotas.

Based on her lifetime of experience working as a firefighter, Ginsburg said: "Relying heavily on written tests to select fire officers is a questionable practice, to say the least." Liberals prefer a more objective test, such as race.

Isn't excelling on written tests how Ruth Bader Ginsburg got where she is? It's curious how people whose entire careers are based on doing well on tests find them so irrelevant to other people's jobs.

In the middle of a fire, it can either be a great idea or the worst possible idea to open a door. An excellent method for finding out if your next fire chief knows the correct answer is a written test.

Unleashing the canard of all race-obsessed liberals, Ginsburg observed that courts have found that a fire officer's job "involves complex behaviors, good interpersonal skills, the ability to make decisions under tremendous pressure, and a host of other abilities -- none of which is easily measured by a written, multiple choice test."

So does a lawyer's job. And yet attorneys with absolutely no "interpersonal skills" get cushy jobs and extravagant salaries on the basis of their commendable performance on all manner of written tests, from multiple choice LSATs and bar exams to written law school exams.

I note that Ginsburg has not shown any particular interest in rectifying the "disparate impact" of legal exams: She never hired a single black law clerk out of the dozens she employed in more than a decade as an appeals court judge. (Her hiring practices on the Supreme Court are a state secret, but I can state with supreme certainty that her clerks do not reflect the racial mix of Washington, D.C.)

But liberals think other people's jobs are a joke, so the testing must also be a joke. That is -- other than their preferred test: "Is the applicant black, female or otherwise handicapped?"

There is no test that can prove all things about an employee and so there is no test that can't be derided by the race-mongers. Which is exactly the point. Get rid of all tests -- except for lawyers who graduated at the top of their law school classes at Columbia, like Ruth Bader Ginsburg. Then liberals are free to impose racial quotas on other people's jobs without limit.

As crazy as this is, even Ginsburg and the other dissenters made a big point of pretending there was some flaw in this particular test. None adopted Sotomayor's position that unequal test results alone prove discrimination.

This suggests that a wise Jewess, due to the richness of her life experiences, might come to a better judgment than a Latina judge would.