Amanda Wagoner Willie
|
Posted: Nov 11, 2018 12:01 AM
Share   Tweet
The opinions expressed by columnists are their own and do not necessarily represent the views of Townhall.com. 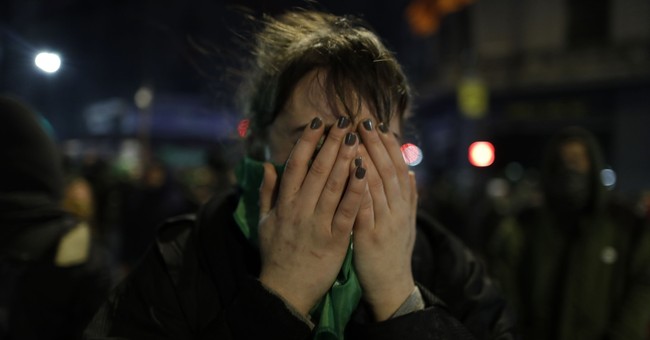 The mental health profession has seen unprecedented changes over the last several decades. Post-traumatic stress disorder was not even recognized as a disorder with specific symptoms until 1980, long after both World Wars, the Holocaust, and serious traumatic events in the life of this nation. PTSD, according to the Mayo Clinic, is “a mental health condition that's triggered by a terrifying event — either experiencing it or witnessing it.” A new study reveals that one-quarter of college-age students - psychology majors no less - have “clinically significant event-related distress,” a predictor of future PTSD. What terrible event brought this diagnosis on? The 2016 election.

Meanwhile, those who suffer with true PTSD such as veterans, sexual assault victims, and perhaps one of the most understudied groups, abortion clinic workers, are overlooked in favor of these snowflakes.

These particular students in the study, psychology majors, make the results even more shocking. They should know the actual definition and causes for PTSD. These are the future therapists to whom we will entrust the mental health of our nation and, according to the study results, 25% of them are going to develop mental disorders of their own because of a political process? This is terrifying.

As a clinical counselor for the past 11 years, I can say with certainty that if election results cause these darling snowflakes mental illness-inducing trauma, they will not succeed in the field of mental health. There are real, actual events that cause considerable trauma that no one is talking about but whose victims are almost always forced into silence by stigma or gag orders.

These victims of PTSD work in the abortion industry.

These are the workers who counsel women in their offices, do the ultrasounds, hold a woman’s hand during an abortion, clean up procedure rooms that are often splattered with blood and other bodily fluids, and put back together the parts of the fetus in the Products of Conception lab. You may believe that abortion doesn’t end a life, that clumps of cells are evacuated, gently, from the uterus. You may believe it is sterile, safe, and rare. You may believe that abortion isn’t traumatic. You may have never considered what these abortion workers do at all. You should.

Abortion workers show alarming levels of trauma often to the point of mental disorder.  One study from 2005 found that over 20% of clinic workers showed symptoms of PTSD because they were constantly “witnessing violence.” In my work as a counselor for And Then There Were None, an organization founded by former Planned Parenthood director Abby Johnson that helps abortion workers leave their jobs and find new ones outside of the industry, the stories I am told are truly terrifying and heartbreaking.

PTSD and it’s prior symptoms affect the everyday lives and relationships of these former abortion workers.  It affects their ability to thrive in everyday society. It hurts them. Many suffer from addiction to alcohol and drugs.

I have a client who still wakes up in the night seeing blood everywhere. She says there are no horror movies accurate enough that show the level of blood and tissue she saw while helping young ladies through their RU-486 chemical abortions. Other clients talk about sleeplessness and anxiety stemming from their time putting together fetal body parts after surgical abortions. Abortion doctors and staff have been documented saying they could no longer stand to see the tiny broken bodies. If an arm or leg or part of the spine is left inside a mom during an abortion the mother faces a dangerous, possibly fatal infection (which happens). Bones and cartilage begin development at seven to eight weeks, about the time many women realize they are pregnant. If you had to stand in a lab reconstructing dismembered children sometimes 60 or 70 times a day, wouldn’t you find that a terrifying experience?

Taking lives is always traumatic. Ask a soldier. The soldier who fights to protect your right to vote. Living in a free country, and exercising our right to vote even when our preferred candidates lose - that’s not traumatic, that’s being an American.

Those with PTSD are often undertreated and it is a problem, whether a soldier home from deployment or a clinic worker after procedure day. We have to stop ignoring the issues that affect people in truly traumatic ways and stop referring to hurt feelings and disappointment as “trauma” because words matter.

Abortion is never without trauma, for the child, the mother, or those in the abortion industry, and it is time we recognize what trauma is - and what it isn’t.

Amanda Wagoner Willie is a Clinical Therapist at And Then There Were None.