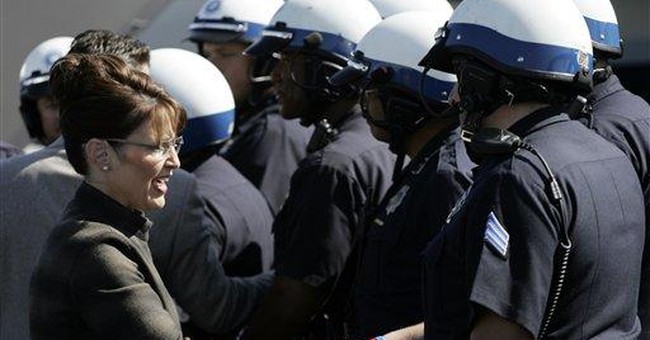 Troopergate Investigator Stephen Branchflower has been slapped with two lawsuits, one by a group of Alaskan residents who believe his inquiry represents an abuse of their tax dollars and the other by five Republican lawmakers who called Branchflower’s tactics “McCarthyistic.”

Both suits were filed at the Third Judicial District in Anchorage on Tuesday.

Their suit specifically detailed an exchange Branchflower had with Alaskan lawmakers during a Senate Judiciary Committee hearing last Friday. “Branchflower admitted that not only did Senator French actually remove a name from Branchflower’s subpoena list, but that he was not sure why French had done that,” their suit said. “When asked specifically about the removal of the name, Branchflower stated that he ‘would have to defer that question to Mr. French,’ thus admitting that the investigation was under the de facto control and direction of Senator French.”

Townhall has the audio of the exchange here.

At that hearing lawmakers approved 13 subpoenas to further Branchflower’s investigation, including one for Palin’s husband, Todd.

Upon receiving the citizen suit, the court issued a summons to Branchflower requiring him to file a written answer to the citizen complaint within 20 days. This date lands smack in the middle of his investigation. Branchflower has said he expects to release a final report between October 10 and October 31, but answering his own summons would surely increase his workload.

The Republican lawmakers’ suit, not only targeted Branchflower, but French and his Democratic colleague Sen. Kim Elton as well. “The defendants are conducting a ‘McCarthyistic’ investigation in an unlawful, biased, partial and partisan political manner in order to impact the upcoming Alaska’ general and national presidential elections,” it said.

Elton is chairman of Alaska’s Legislative Council, which is overseeing Branchflower’s investigation. He is also ardently supporting Obama’s candidacy and has donated $2,000 to his presidential campaign.

The Republicans argued Commissioner Monegan gave Palin “ample cause” for firing by defying her, in concert with Senator French, on budget issues.

“Working with Sen. French, and contrary to directions from Governor Palin, Monegan had attempted to include items in the Alaska state budget appropriating funds for various items within the Department of Public Safety that Governor Palin had previously vetoed,” their suit said. “Afterwards, contrary to the instructions of the Governor and contrary to the Governor’s budgetary plan, Monegan attempted to travel to Washington D.C. at state Executive Branch expense, in order to request federal funding through ‘earmarks’ for line items from Alaska’s congressional delegation.”