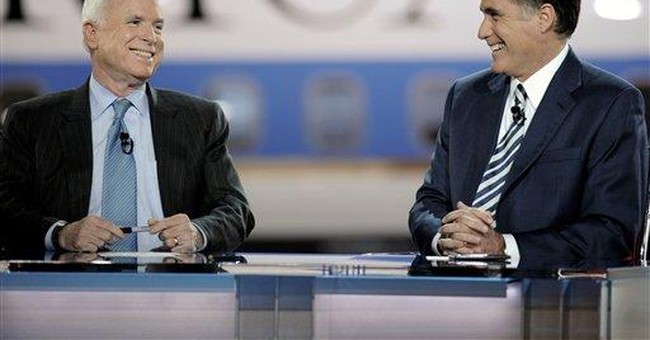 Romney said McCain is a “quintessential Washington insider, a man who has been there 25 years, knows all the lobbyists, knows all the Democrats all the Republican, knows who owes who, has favors to repay and scores to settle.”

Romney recognized that endorsements from Florida Governor Charlie Crist and California Governor Arnold Schwarzenegger for McCain was giving the Arizona senator a boost, but touted his own conservative media endorsements.

“When Sean Hannity says he’s voting for me and when Laura Ingraham says she’s endorsing me, you have people who are saying things that are pretty powerful.” He also mentioned National Review’s endorsement.

“These people have nothing to gain from endorsing me,” Romney said “They don’t get anything by making an endorsement, they make an endorsement because it means something.” On the other hand, according to Romney, “when politicians endorse, some are in the same category…other politicians that endorse are looking for something back. They get with whoever they think is going to win.”

Then Romney chuckled. “I have to tell you a good story,” he said. “I was talking to one governor and I was asking for his endorsement and this was a while back and he said ‘well, you know I am going to wait until the end and I am going to see who is ahead and that is who I am going to endorse.’ So you have different reasons when you are politicians.”

Romney did not name this governor, but his son Matt taped himself before the Michigan primary making a prank phone call allegedly from Schwarzenegger.

In the video Matt tells viewers that “maybe he [Mitt] thinks he’s going to get an endorsement.”