How Do You Define Victory Against Islamic Terrorism? You Focus on Climate Change 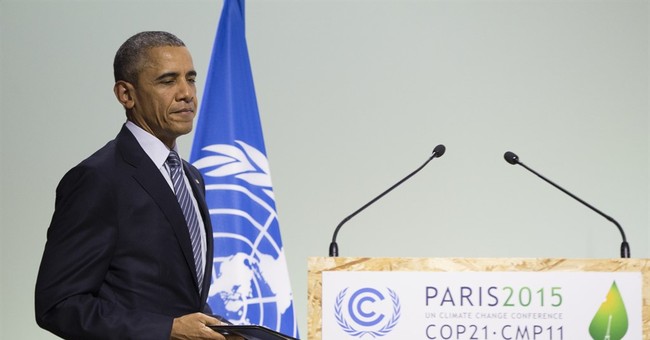 When President Ronald Reagan was asked how he defined victory in the Cold War he responded simply, “we win, they lose.” Now that, folks, is pretty simple and easily understood by everyone: Americans, allies, and the Soviet Union. And Reagan never relented in defining the enemy as the “evil empire” and by commanding at the Brandenburg Gates, “Mr. Gorbachev, tear down this wall.”

It was a profound statement and rallying cry that fomented an emboldening spirit to those who lived behind that wall under the dark specter of tyranny. That was exceptional American leadership at its best. Quite contrary to someone uttering in a perceived off-mike moment, “after reelection I will have more flexibility.”

And so this week they gathered in Paris, a city that has been rocked with two horrific Islamic terrorist attacks this year. I know many of you have forgotten the Charlie Hebdo and Jewish kosher grocery store mass killings earlier this year. That is just a reflection of our soundbite, reality TV, short-term memory mentality in the west. Yes, world leaders came to Paris, the famed City of Lights to discuss the most critical and greatest threat to our world – climate change.

A week ago, French President Francois Hollande was in Washington D.C. and was certainly reassured by these words from President Obama: “What a powerful rebuke to the terrorists it will be, when the world stands as one and shows that we will not be deterred from building a better future for our children.” Unfortunately President Obama was referring to the climate change conference in Paris, not a NATO Article V conference. And in preparation for the conference, I read that “instead of marching, activists placed thousands of pairs of shoes -- weighing more than four tonnes according to organisers -- on Place de la Republique square. UN Secretary General Ban Ki-Moon left a pair of running shoes, and Pope Francis sent shoes to be placed on his behalf.”

Can I be very blunt here? We have shoes being piled up in Paris, but these western “leaders” fail to recognize the importance of putting combat boots on the ground to defeat the savage and barbaric Islamic terrorist scourge known as ISIS. It appears that some have made themselves believe that the greatest testimony and means to honor the victims of the most recent Paris, Friday the 13th Islamic terrorist attack is a climate change agreement.

Hmm, any moment I expect James Taylor to break out singing “You’ve got a friend.”

This is how we occupy a delusional state of existence, kind of like the ol’ song by the B-52s called “Private Idaho.” We have these global leaders who attempt to see us a policy line that Islamic terrorism is directly a result of climate change – yes, UN Secretary General Ban ki-Moon is the most recent to utter this charge. It is as if they want us to believe a climate change agreement developed this week will end Islamic terrorism. You know, the reason why ISIS is beheading, crucifying, raping, selling girls and women into slavery, and committing genocide against Christians driving them from ancestral homelands is because the earth is warming too much. If we could just slow down the melting glaciers and rising seas, ISIS would be at peace with all of us.

Yes indeed, they are living in their own “Private Idaho.”

So we have policies that promote a belief that, let me be frank, the weather is the greatest threat we face. We ignore the true enemy right before our eyes. To not accept this as definitive fact will only draw the ire and anger of those acolytes worshipping this cause.

Remember that earlier this year President Obama made this statement before the 218 graduating young Ensigns of the US Coast Guard Academy: "'Climate change will impact every country on the planet. No nation is immune," the President told the 218 graduating cadets. Climate change constitutes a serious threat to global security, an immediate risk to our national security, and, make no mistake, it will impact how our military defends our country. And so we need to act — and we need to act now. Many of our military installations are on the coast, including, of course, our Coast Guard stations. Around Norfolk, high tides and storms increasingly flood parts of our Navy base and an air base. In Alaska, thawing permafrost is damaging military facilities. Out West, deeper droughts and longer wildfires could threaten training areas our troops depend on. You are part of the first generation of officers to begin your service in a world where the effects of climate change are so clearly upon us. Climate change will shape how every one of our services plan, operate, train, equip, and protect their infrastructure, today and for the long-term."

We cannot define victory against Islamic terrorism not just because we do not express it. The problem is that we do not even recognize it as a threat. If our policy decisions are focused on climate change as the preeminent national security threat we are not rebuking the enemy, we are emboldening the enemy.

The 150 global heads of state gathering in Paris should have canceled the topic of climate change, and why could they not do this by Skype or GoToMeeting. They should have instead met either in Paris or NATO headquarters and discussed Article V.

Climate change agreements do not send a rebuke to Islamic terrorists and jihadists. A true coalition of liberty loving people and their military might delivers the only message savage barbarians comprehend – the message of death.