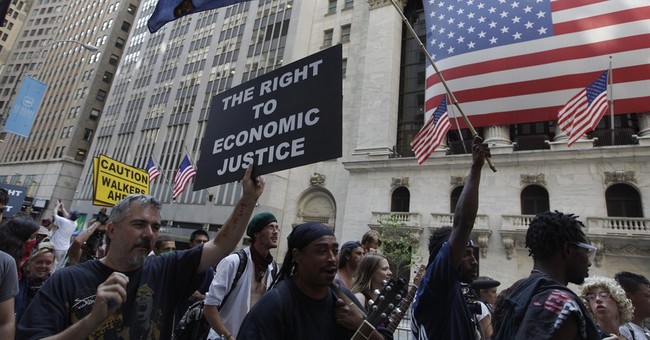 We are starting to get into the 2016 election cycle already – after all, the 24 hour news cycle has to have something upon which to pontificate. Recent polls show that the top two issues concerning Americans are the economy/jobs and terrorism – which I classify as foreign policy/national security. However, in the world of political gimmickry the prevailing issue that liberal progressives wish to focus on is income equality. Their emphasis cannot be on the issue of record and concern for the American people. No, it must be on a made up, politicized false narrative of a grievance that serves to manipulate the populace purely for political gain.

This past weekend I was watching some of the NBA playoffs – especially since my hometown Atlanta Hawks have a shot at making it to the Eastern Conference finals. As I was watching the Cleveland Cavaliers and Chicago Bulls game it hit me – what is the real issue of income equality?

Here I was, watching these ten fellas on the court--who are all millionaires--and just laughed, wondering if these are the ones the progressive socialists target with their inane class warfare rhetoric. I mean they are getting paid gross amounts of money to play a game and they get how many months off from work? Okay, some of you are going to tell me that they truly have no off season – they are constantly training. And just how long is a game? I do not think it is comparable to the small business owner who is struggling to make payroll and putting in some 60-70 hours a week, or more.

Those of you who personally follow me on my website allenbwest.com, know very well how much I enjoy college football and basketball. And I do not hold any animosity to those who possess such impeccable talents and skills as to become successful in the world of sports.

But let’s make a simple comparison.

The starting salary of a young enlisting American warrior is $1,547 per month. There are those of you who will say that young troop is getting free food, uniforms, and housing (barracks). So I must ask, is that what we call a living wage? And yes, there are those who enlist who do have a family. I am quite sure there are those of you reading this missive who are astute enough to calculate the minimum wage of an American soldier, sailor, airman, or Marine. Let’s look at the salary of an enlisted troop at the 8-10 year service mark, where one should find the E6-E7 rank, Their pay rate is from $3,261 to $3,747 per month, and they almost always have families at that point.

They don’t just play a game. And they are called on to perform and be ready 24/7. They do not exist to entertain us, but to allow us to be entertained by way of pursuing our God-given unalienable rights of life, liberty, and the pursuit of happiness.

Consider the liberal progressive and union rantings about a “living wage” and do the comparison between the fast food worker and the American warrior. If you mean to tell me that it is more important to pay the french fry worker $15/hour while a young troop serving his nation has to request food stamps – you are somewhat delusional. I do not think we want to encourage a career at McDonald’s as opposed to a career serving our nation.

And what about the commissioned officers?

The starting salary for a “Wobbly One” – Warrant Officer 1 – is $2,868.30 per month. And many Warrant Officers have been prior service enlisted. And a brand new Second Lieutenant/U.S. Navy Ensign, with a college degree mind you, starts at $2,934.30 per month – many of whom immediately begin as platoon leaders, commanding anywhere from 25-35 men and women.

Now, I am assessing the U.S. military active duty base pay scale for 2015 and this does not consider those who get additional incentive pay such as JAG, doctors, pilots, or even Airborne/Special Operations.

Should income be based upon the worth of one’s service to society? If it were, perhaps the elites of the political, entertainment and media would be paid far less. And our teachers and military would be paid far more.

I myself served 22 years in uniform and upon my honorable discharge and retirement received 55% of my base salary pension – that was $3,900 per month. A congressional pension is approximately 70% of base salary after 5 years on Capitol Hill.

Liberal progressives don’t really care about income equality, it is just a political objective. The world is replete with inequality but there is one thing that is equal – equality of opportunity. The progressive socialist left believes in something completely opposite – equality of outcomes, which they claim is social justice. It is the religion of social egalitarianism.

God gave us different skills and talents. I am proud that He made me a soldier… “Duty not Reward.”