Gratitude and Humility on the Gridiron 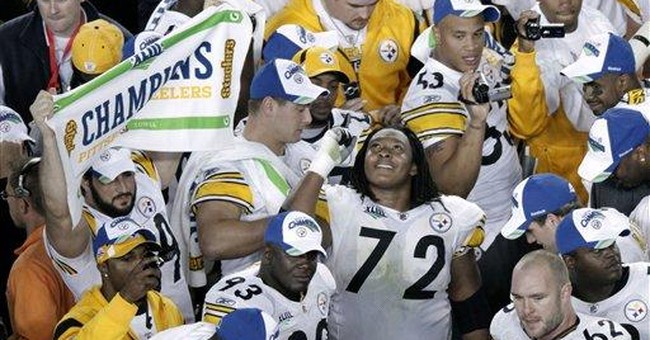 Faith will play a larger role than ever before right in the middle of the Super Bowl hoopla. And it won't be with pre-game public prayers or loud demonstrative pronouncements. No, faith will influence the Super Bowl, on the world's biggest stage, through two of its primary virtues: humility and gratitude.

Steelers' owner, Dan Rooney, leads Team Humility. Rooney, a devout Catholic who attends Mass each day, exudes low-key simplicity. He lives in a modest house, from which he walks to home games. The owner drives a Buick, stands in line to eat lunch in the team cafeteria each day, and speaks to his players by name. His entire work force marvels at how Rooney treats everyone equally, from star quarterback Ben Roethlisberger to the laundry room laborer. In other words, Rooney models humility, not counting himself as higher or more important than others in the organization.

Dan Rooney assumed the reins of the Steelers from his father. From the beginning of their ownership, the family has instilled humility into the core DNA of the Steelers' organization. Steeler leadership exhibits little patience for luxuries, egos, and frills. Rather than boasting a self-exalting star named Terrell Owens, the Steelers lead instead with the workaday Hines Ward, known for his work ethic, versatility, and blocking. Rather than high-profile coaches who serve on a rotisserie at the pleasure of ownership, the Steelers have had only three coaches in the last thirty years. Mike Tomlin, head coach, is a man known less for words and more for action. Tomlin values team and success over individuals or stardom. He says, “We don't care who gets the credit, and all we want to do is win.” In other words, just do the job, and all the details of self will work out.

Many observers, including NFL Commissioner Roger Goodell, have commented that the Steelers' humility reflects the workmanlike ethic of the city of Pittsburgh. But the Steelers' humility finds its origins first and foremost in the faith life of Dan Rooney. Rooney's deep devotion expresses itself not in public prayers or pious pronouncements, but in quiet, humble leadership, day in and day out.

Team Humility will face Team Gratitude, the Arizona Cardinals. Kurt Warner, the Cardinals' quarterback, leads the historically inept team into its first-ever Super Bowl. The Cardinals have been an underwhelming NFL franchise for decades, failing even to sell out their first home playoff game this year. Such a failure is unimaginable in any other NFL city, but it is par for the course in Arizona where the definition of a rabid fan clearly does not include ever actually showing up for a game.

Again, many have noted that the Cardinals seem grateful just to be at the Super Bowl. After a half-century of losing and failures to launch, gratitude to be on the dais at the Super Bowl seems appropriate. But the Cardinals' gratitude emanates from the gratitude of its on-field leader, Kurt Warner. Warner's faith life is well-chronicled. But it is that faith life that has sustained him through early failures (where he ultimately landed as a bagboy in a grocery store) to career success (including a Super Bowl win with the Rams), to career sputters (featuring injuries and a roster release from the Giants), to his return to the top of the heap this year.

Warner's trust in God, and his faith that his life has purpose, have given him an unflappability and a deep sense of gratitude for any achievements that come his way. He is indeed “just glad to be here” at the Super Bowl but not for the usual reasons. Money and fame, he need not. An outlet for his competitiveness and a platform for his faith life and the capacity to influence others, he appreciates greatly. His gratitude stems from a sense that what he has is a gift, not an entitlement. Thus, he gives credit to God each time he addresses the media. Gratitude and faith simply permeate his life.

And that gratitude rooted in faith has taken root in his team. More than twenty teammates accompany Warner to Bible study each week. More than a few have spoken this week of the influence Warner's life has had on them personally and professionally. For that, they too are grateful.

So, Sunday's square-off will feature two teams who have been built on faith in unusual ways. One on the humility of its owner. The other on the gratitude of its quarterback. Both built on a faith that weathers storms and seeks strength in its conviction that life has a higher purpose and goal than merely winning and losing.