Dan Epstein is Executive Director of Cause of Action, a non-partisan organization that uses public advocacy and legal reform tools to ensure greater transparency in government, protect taxpayer interests and promote economic freedom.

Prior to joining Cause of Action, Epstein served at the U.S. House of Representatives for several years as a Counsel for Oversight and Investigations at the Committee on Oversight and Government Reform. He was the lead counsel on tax, labor, nonprofit and federal grant spending investigations and oversight and his prominent investigations concerned the Association of Community Organizations for Reform Now, the Service Employees International Union, the National Labor Relations Board, and the National Mediation Board.

Before his Hill experience, Epstein worked on legal reform issues in the private sector. He graduated with honors from Kenyon College in Gambier, Ohio, where he was Editor-in-Chief of The Kenyon Observer, a Felix Morley National Journalism Finalist, and a Walter Judd Scholar at the Institute on Political Journalism, Georgetown University. Epstein received his law degree from Emory University in Atlanta, Georgia and is a member of the Maryland State Bar Association and the Federal Bar Association. He is an Eagle Scout and President’s Volunteer Service Award winner. 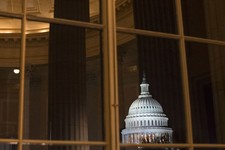