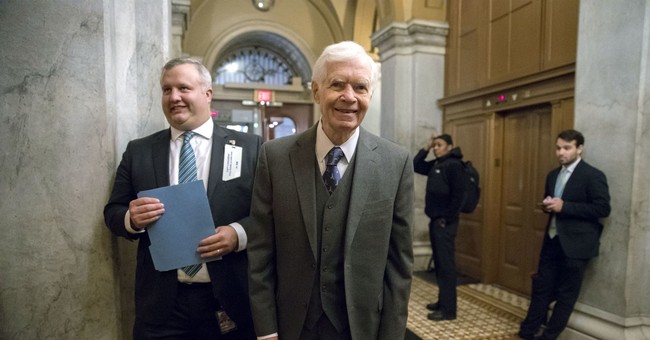 Cochran was a Navy veteran and former chairman of both the Senate Agriculture Committee and Senate Appropriations Committee. In April 2018, he resigned from public office due to health reasons.

Cochran served in Congress for more than 45 years. When he was elected to the Senate in 1978, he became the first Republican to win statewide election in Mississippi since Reconstruction. Cochran had previously served three terms in the House of Representatives.

Cochran was known for his tireless efforts for procuring funds to benefit his home state of Mississippi.

In the aftermath of Hurricane Katrina, Cochran acquired $100 billion for Mississippi and other Gulf States while serving as chairman of the Senate Appropriations Committee in 2005. He regained his chairmanship in 2015.

A fan of earmarks, Cochran backed Navy shipbuilding to benefit Ingalls Shipbuilding in Pascagoula, a huge employer in the state of Mississippi. Additionally, the New York Times reported that Cochran directed $490 billion in pork-barrel projects to Mississippi.

Cochran leaves a legacy as one of the longest serving member of Congress. With his true Southern charm, he made friends and allies on both sides of the political aisle.

Democratic Senator Patrick Leahy of Vermont said that Cochran was a "dear friend," before releasing a statement on Twitter.

Thad Cochran was an American patriot, a model of what we can be as a Senate and as a country, and I've never had a closer friend in the Senate. Today Marcelle and I are grieving with Kay and all of his family. We will miss our friend dearly. My statement: https://t.co/Tf88XVUfmg

Thad was a dear friend. https://t.co/hXuVTA0mjm

Republican Senator John Boozman of Arkansas tweeted that Cochran was a “trusted neighbor and tremendous friend.”

Thad Cochran took me under his wing when I joined the Senate. His mentorship was unmatched and invaluable. He was a trusted neighbor and tremendous friend to Arkansas and I’ll always remain grateful for his legacy and more importantly, his friendship and counsel.

Democratic U.S. Representative Bennie Thompson of Mississippi also offered his praises of Cochran, tweeting that Cochran “was an excellent public servant who understood the necessity of diversity and inclusion.”

I would like to offer my condolences to the family of former U.S. Senator Thad Cochran. He was an excellent public servant who understood the necessity of diversity and inclusion. Cochran’s talents will be missed by all Mississippians. pic.twitter.com/NU8mPa4SBg

Even Senate Minority Leader Chuck Schumer called Cochran "one of the most personally decent, nicest people" he's met in his career in the Senate.

Thad Cochran was one of the most personally decent, nicest people I’ve met in my career in the Senate. He will be missed. https://t.co/muIdeLVpUH

Speaking Thursday of the former Senator, Republican U.S. Senator Roger Wick of Mississippi said that “Thad Cochran was a giant in the United States Senate and one of the greatest champions Mississippi has ever known.”