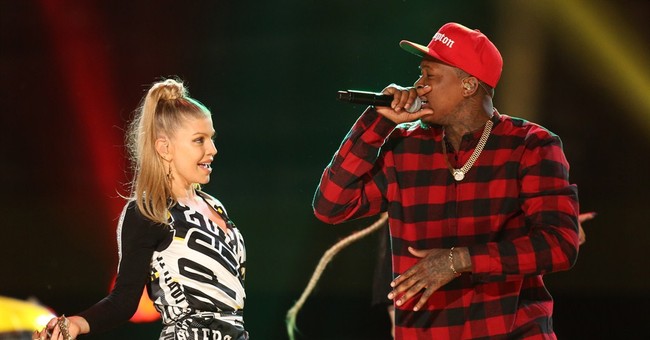 Over the weekend at a music festival in San Antonio, Texas, the rapper Keenon Daequan Ray Jackson, AKA YG, called a fan on stage after the unnamed man purportedly was ambivalent about supporting President Donald J. Trump. The rapper asked his audience, "Do you f*ck with Donald Trump," but the concert goer did not express dissatisfaction withe the president. YG called the fan on stage, and demanded that he say, "f*ck Trump." The boy refused, and YG promptly kicked him out of the concert.

"I don’t know if I want to shake your hand yet. Listen, I spotted you out in the crowd. I asked you if you f**k with Donald Trump, you said you don’t know," YG asked after the fan stepped on stage. "So, since you don't know, I need you to make up your mind tonight."

The boy, going along with the onstage appearance, looked confused. The rapper asked him to hurl the obscenity at Trump, and then he refused and shook his head.

"No you won’t?...Get him off the stage...He a Donald Trump supporter. Get his a** outta here," the artist with albums such as The Real 4Fingaz, Just Re'd Up, Just Re'd Up 2, 4 Hunnid Degreez, and 4Real 4Real said to applause.

On Monday morning, the White House issued a statement to Fox News blasting the stunt as "another example of the tolerant left."

Courtesy of USA Today, here are examples of YG's previous animosity towards the commander-in-chief.

YG's song "FDT," an abbreviation for "(Expletive) Donald Trump," was released in March 2016 with the late Nipsey Hussle and has since become one of the most notable protest songs of the Trump era. The song featured lyrics like "Reagan sold coke, Obama sold hope / Donald Trump spent his trust fund money on the vote / I'm from a place where you prolly can't go / Speaking for some people that you prolly ain't know."