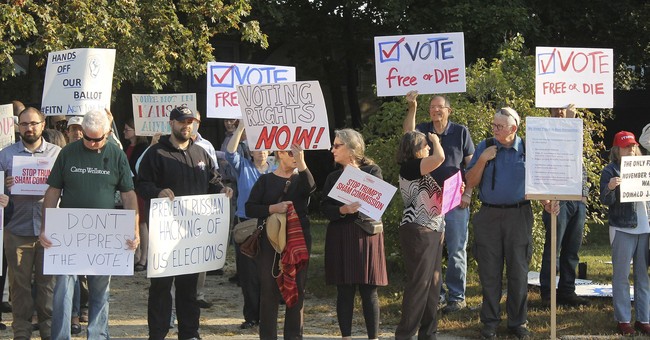 In April 2019, Project Veritas investigated New Hampshire resident Robert Bell, and recorded the gentleman admitting to voting in 2018 in the Granite State as well as a second time in Florida, where he once owned a second house. That led to an investigation by New Hampshire's attorney general and a subsequent charge of voter fraud for voting twice. On Wednesday afternoon, New Hampshire jurors found Bell guilty of voter fraud in the 2018 election.

According to the Union Leader, "Jurors reached their verdict against the 77-year-old Air Force veteran early Wednesday afternoon following closing arguments in which a state prosecutor insisted Bell knew that voting in the same election in both states was wrong, while his defense argued that he never intended to commit a crime."

His defense attorney told the court that Bell was simply confused about voting dates and his eligibility in each state. But, the state's assistant attorney general argued that not only is confusion not a defense, but that statements made by Bell indicate he willfully violated the law.

Confusing dates does not equal a lack of criminal intent. … There was no confusion when the defendant deliberately chose the candidates he wanted in both states,” Assistant Attorney General Nick Chong Yen told jurors.

Chong Yen also said Bell, a registered Republican, was aware that Florida’s gubernatorial and U.S. Senate races were tight and that he was more interested in them.

“Based on this information the defendant knew his vote in Florida would be significant,” he said.

In the Project Veritas video, Bell admitted to a Veritas journalist that he voted twice. His ex-wife, living in Florida, was adamant that Bell should not have been voting in the Sunshine State.

JOURNALIST: … I’m also seeing that you voted absentee in Florida in the 2018 election…

BELL: Yeah I was down there for a funeral and so I voted in early voting.

JOURNALIST: So, you early voted in Florida in 2018 and you voted in person in the polls here in New Hampshire?

Bell is a registered Republican. He now faces a "three and a half to seven years in prison, up to a $4,000 fine, and could lose the right to vote under the New Hampshire Constitution."

Editor's Note: In the interest of transparency, the author of this piece has a relative who works for Project Veritas.