Charles Barkley Gets Dunked On By Pence's Chief of Staff, VP Says League Is Owned By Commies 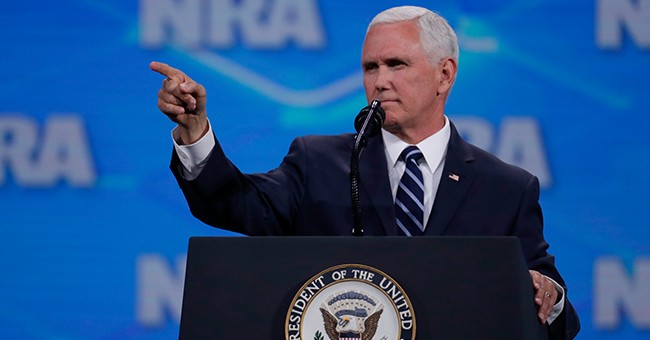 Vice President Mike Pence's chief of staff slammed NBA legend Charles Barkley after the former professional basketball player attacked the vice president for condemning China and the NBA. As Townhall has covered, numerous NBA players and coaches have failed to stand up for freedom over the past couple weeks as Hong Kong protesters dare to challenge communist China for their independence. This "controversy" started after Houston Rockets executive tweeted an image supporting the protesters, quickly deleted it, and then clarified his stance. Typically once out-spoken athletes like Lebron James said the executive was "being selfish" for showing support for democracy, hinting that his comments put the NBA in financial risk in China. Since then, both Democrats and Republicans alike have criticized the NBA for kowtowing to China.

On Thursday, Vice President Pence went further, saying that, "Nike promotes itself as a so called 'social justice champion,' but when it comes to Hong Kong, it prefers checking its social conscience at the door."

He noted that "Nike stores in China actually removed their Houston Rockets merchandise from their shelves to join the Chinese government in protest against the Rockets general manager’s seven-word tweet, which read: 'Fight for Freedom.  Stand with Hong Kong.'"

"And some of the NBA’s biggest players and owners, who routinely exercise their freedom to criticize this country, lose their voices when it comes to the freedom and rights of the people of China," he continued. "In siding with the Chinese Communist Party and silencing free speech, the NBA is acting like a wholly owned subsidiary of the authoritarian regime."

"A progressive corporate culture that willfully ignores the abuse of human rights is not progressive; it is repressive," Vice President Pence added for good measure.

On TNT, Barkley said, that "Vice President Pence needs to shut the hell up."

"I don't understand why these holier-than-thou politicians, if they're so worried about China, why don't they stop all transactions with China?" Barkley added. "I think it's unfair for them to do all their business in China, and just because this thing happened, try to make the NBA and our players look bad. All American companies do business in China. Period."

Friday morning, Pence's chief of staff Marc Short said that while he liked Barkley's basketball commentary, on China, Barkley was "out of his league here."

"The reality is, it’s a great irony that basically NBA players and Nike say that there’s a right for American basketball players to kneel and not stand for the National Anthem, which is a right that our soldiers have fought for for them as far as free speech, but when people in Hong Kong look to exercise those same rights in many cases people in China are imprisoned, " Short continued.

"Uighur Muslims or Christians are sent to gulags never to be seen again, and the NBA is silent on that, much less what Nike does, is to give major multi-million dollar endorsements to athletes who refuse to honor the American flag and yet then when the Houston rockets general manager makes a benign comment in support of Hong Kong they take away all the Houston rockets merchandise in China."  Short remarked. "That’s an enormous offence and it’s a tremendous irony."