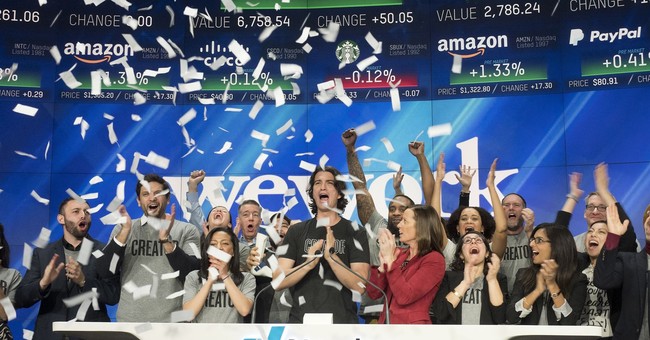 You may have heard the outrageous but apparently true story about WeWork's soon-to-be former CEO, Adam Neumann. A recent Wall Street Journal profile showed the leader of the innovative company WeWork, a business whose product is simply renting out temporary office space in cities across the globe for start ups and other firms, showed that Neumann allegedly loves to party with drugs and liquor. In fact, he often did so on company property and with company employees. Now, it looks like he is resigning after mounting pressure from inside the company.

Here's what the WSJ said happened during a recent meeting explaining why WeWork had to fire hundreds of employees:

Alcohol has been a big part of the culture, particularly in We’s first half-decade. Mr. Neumann has told people he likes how it brings people together, and tequila, his favorite, flows freely. Executive retreats sport numerous cases of Don Julio 1942, with a retail price of more than $110 a bottle, and pours sometimes start in the morning.

A few weeks after Mr. Neumann fired 7% of the staff in 2016, he somberly addressed the issue at an evening all-hands meeting at headquarters, telling attendees the move was tough but necessary to cut costs, and the company would be better because of it.

Then employees carrying trays of plastic shot glasses filled with tequila came into the room, followed by toasts and drinks.

Soon after, Darryl McDaniels of hip-hop group Run-DMC entered the room, embraced Mr. Neumann and played a set for the staff. Workers danced to the 1980s hit “It’s Tricky” as the tequila trays made more rounds; some others, still focused on the firings, say they were stunned and confused.

On Tuesday, the New York Times reported that the tequila drinking, 80s rapping business executive will be stepping down.

Under pressure to leave from board members and investors in recent days, Mr. Neumann will become nonexecutive chairman of WeWork’s parent, the We Company. WeWork will name two current executives, Sebastian Gunningham and Artie Minson, as interim co-chief executives, one of the people said. The company will conduct a search for a permanent chief executive.

WeWork also has also had a dismal month in terms of its potential stock value. The company has officially delayed its public offering after inner turmoil has left investors running scared. A private evaluation said WeWork was worth more than $40 billion. Now, it is more likely closer to $10 billion.