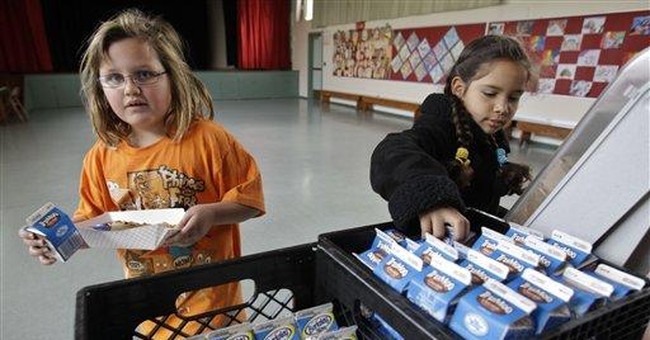 Cigarettes and chocolate milk/These are just a couple of my cravings/Everything it seems I like's a little bit stronger/A little bit thicker/A little bit harmful for me, Canadian singer Rufus Wainright says in his most famous song. It's a good thing Rufus is not a kid in New York City schools. A new report reveals that the NYC Department of Education wants to ban chocolate milk from the cafeteria to help combat obesity.

"The thinking is that these kids are already getting too much sugar, why are they getting it in their milk?’’ one DOE source told the paper.

The DOE, for their part, said in a statement that no final decisions have been made.

"Our priority is the health and well-being of our students, and every day, we offer a variety of healthy, delicious, and free meal options that exceed USDA standards. We look forward to discussing our menu with these members of Congress," the agency said.

The NYP interviewed the Brooklyn-based Ditommasa family for their opinion on the move. "'It would be awful to take away people’s chocolate milk,' 10-year-old Caterina Ditommasa chimed in. Her mother also was against the idea, saying, 'The schools serve other sugary drinks that are no better — juices and sodas...The real problem is that New York City lunches are unhealthy in general, all prepackaged and full of preservatives.'"

Caterina's father, however, somewhat supported the move. "'Not to be a health nazi,' he said, 'but it’s not the worst idea.'"