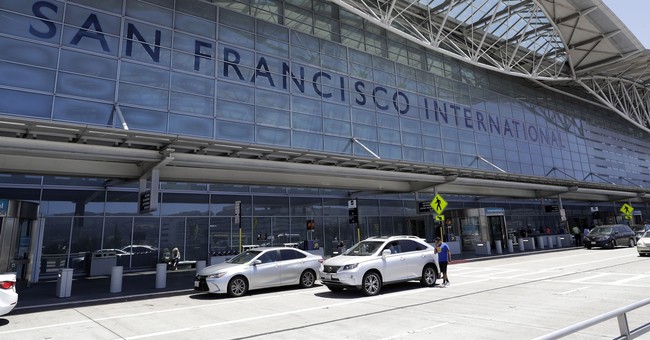 On Tuesday, August 20, San Francisco International Airport will ban the sale of plastic water bottles to travelers from airport restaurants, shops, and kiosks.  This means the only way you'll get a plastic water bottle into the airport is via an empty one through security. You are not allowed to bring an unopened bottle of water through due to potential security issues. The primary reason behind this ban is cut down on litter and pollution. But, as pointed out by Andy Kessler of the Wall Street Journal, the move is particularly stupid because bottled sodas and other sugary beverages will still be available to customers.

After running late for your flight after a 30-minute security line only to have TSA confiscate your Fiji water bottle, you’ll now have to stop at a crowded water fountain to fill your own metal flask. Or buy an overpriced glass or aluminum bottle at the concession stand, paying another 10 cents for a bag. And your teeth will chatter if you drink through a paper straw. Of course you could risk dehydration instead: Men lose up to a half-gallon of water during a 10-hour flight. Oddly, you can still buy sugary drinks in plastic bottles at SFO; only healthy, calorie-free water is banned in plastic. You can’t make this stuff up.

According to Travel and Leisure, "the San Francisco International Airport has over 100 “hydration stations,” which are made for refilling reusable water bottles with clean, filtered water."

SFO  spokesman Doug Yakel told media earlier this summer that the airport is "on the leading edge for the industry" and the hub wants "to push the boundaries of sustainability initiatives."