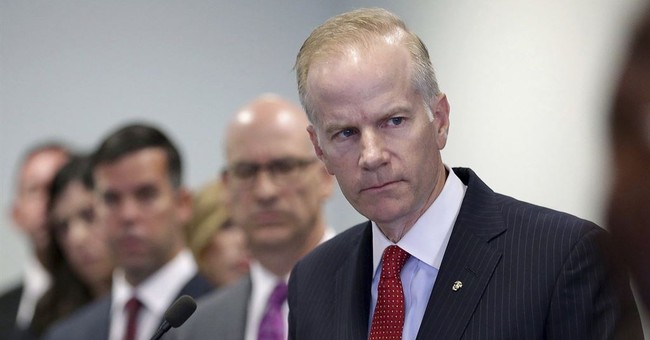 The United States Attorney for the Eastern District of Pennsylvania appointed by President Donald J. Trump issued a statement Thursday, calling out the "culture of disrespect for law enforcement" promoted by Philadelphia political leaders, which he says fostered the sort of environment that made it possible for a criminal to shoot hundreds of rounds of ammunition at police officers like the city saw Wednesday night.

William McSwain, US Attorney for the Eastern District Of Pennsylvania, released a press release Thursday regarding the police's response to Maurice Hill -- the career criminal with a rap sheet of drug offenses, assaults, and fleeing arrests who opened dire during a drug bust gone awry.

"What I witnessed last night was true heroism by the Philadelphia police. But the crisis was precipitated by a stunning disrespect for law enforcement – a disrespect so flagrant and so reckless that the suspect immediately opened fire on every single officer within shooting distance.  Only by the grace of God did they survive," McSwain asked.

"Where does such disrespect come from?" McSwain asked. He then directed his message to Philly's progressive District Attorney Larry Krasner.

"There is a new culture of disrespect for law enforcement in this City that is promoted and championed by District Attorney Larry Krasner – and I am fed up with it."

"It started with chants at the DA’s victory party – chants of 'F*** the police' and 'No good cops in a racist system,'" he continued. "We’ve now endured over a year and a half of the worst kinds of slander against law enforcement – the DA routinely calls police and prosecutors corrupt and racist, even “war criminals” that he compares to Nazis."

"This vile rhetoric puts our police in danger.  It disgraces the Office of the District Attorney.  And it harms the good people in the City of Philadelphia and rewards the wicked," he added for good measure.

McSwain argued that what the city does not have is "robust enforcement by the District Attorney."  Instead, the city has "diversionary programs for gun offenses, the routine downgrading of charges for violent crime, and entire sections of the criminal code that are ignored. "

"The criminal laws in this City – and especially the existing gun laws and drug laws – should be aggressively enforced in order to protect the public and the police," McSwain argued. Many, including, Philadelphia's Mayor Jim Kenny have called for new gun control measures. McSwain points out what is really needed is for "the District Attorney and his enablers to stop making excuses for criminals" and to have some "accountability."

McSwain, age 50, is a former Marine infantry officer with a law degree from Harvard, where he was an editor of the Law Review. Townhall has previously reported that McSwain also recently slammed the city's sanctuary city policy towards illegal immigrants. He was recommended for the position in 2017 by Republican Pennsylvania Senator Pat Toomey and Democratic Pennsylvania Senator Bob Casey.

McSwain added a final thanks to the first responders, saying, "To the officers involved last night – those who were wounded and those who rushed to defend them – and to their families, I say thank you. The whole City thanks you. We owe you more than we can ever repay."