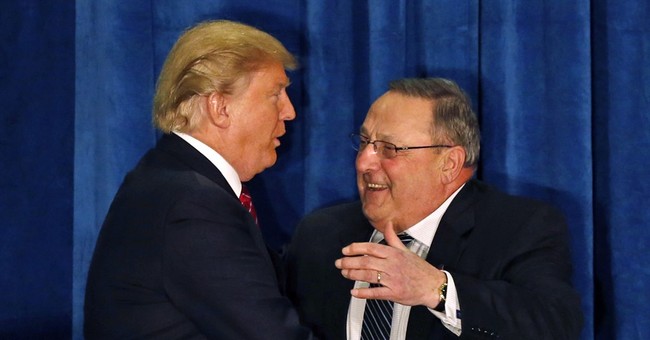 Townhall has previously reported that Maine's lobster industry, which thousands of Americans depend on each year to provide for their families, is under threat thanks to a bogus federal regulation which effectively kills the industry. That proposed rule by the National Oceanic and Atmospheric Administration cuts the number of lines that lobstermen are allowed to cast by half, meaning it would be less likely that the seafood industry would haul the numbers of lobsters needed to stay in business. The whole point of limiting the lines is supposed to help save the right whale. But all evidence points to the fact that these endangered whales do not swim in Maine waters and are instead found in Canadian waters where these lobstermen don't even work. If the regulation goes into effect, Maine's economy and the people of Maine will suffer. The issue has united virtually all Mainers, but it looks like the only way that this impending disaster can be avoided is if President Donald J. Trump comes to the rescue. Now, it looks like former conservative Maine Governor Paul Lepage has come out of his semi-retirement to convince the Trump administration the regulation should be repealed.

According to the group "Maine People Before Politics," Lepage spoke on Wednesday with senior White House officials regarding NOAA's regulation.

Lepage serves as the honorary chairman of the group and said in the statement that he thanked "the Trump Administration for their attention to this critical issue."

"I’m pleased to say that today was a good first step," he added. "I am hopeful a solution can be found that is focused on science and not statistics."

On July 16, Lepage sent President Trump a personal letter asking for his intervention. In that letter, Lepage explained the "the devastating effect the proposed rules would have on the lobster fishery, a symbolic Maine industry."

As I have noted, "Even the left-wing progressive Governor Janet Mills says that there is scant evidence that the activity of the lobstermen is to blame for any endangerment towards these whales. Six right whales did, in fact, die this past year, but those deaths occurred in Canadian waters."