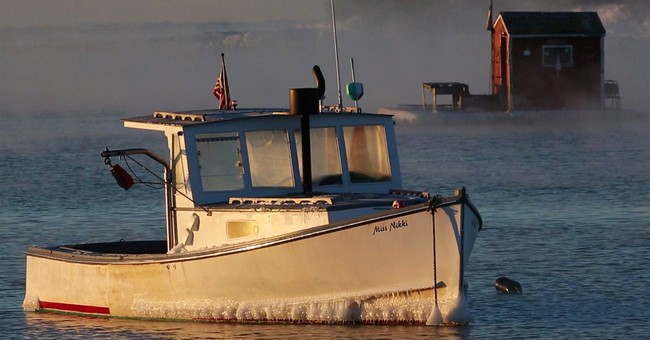 Big government overreach knows no bounds. The latest example of federal regulation that will threaten thousands of jobs and livelihoods of hardworking Americas comes from the National Oceanic and Atmospheric Administration. The NOAA says that Maine's lobster industry is to blame for the killing of right whales, an endangered species, and has enacted regulations set to take place this September which will harm the already struggling industry. Yet, the evidence says that the proposed regulation will in no way actually help the whales and will instead only burden lobstermen.

As reported by the Portland Herald Press, NOAA "has ordered Maine to craft a detailed plan to reduce the lobster industry’s threat to right whales by 60 percent by September. Federal regulators say entanglement in fishing gear and ship strikes are driving the whale’s decline, with just over 400 of them left."

Their intended regulation would force the lobster industry "to cut the number of buoy lines in the Gulf of Maine by half this September."

This means that lobstermen would be less likely to catch lobsters that they could then sell to restaurants, distributors, and in other places. Thus, they would lose income and have to fire hundreds of workers.

Even the left-wing progressive Governor Janet Mills says that there is scant evidence that the activity of the lobstermen is to blame for any endangerment towards these whales. Six right whales did, in fact, die this past year, but those deaths occurred in Canadian waters.

A letter to the editor in Kennebunk, Maine's local newspaper detailed the plight of the lobstermen succinctly:

"...Maine lobstermen are facing what one lobsterman called “the fight of our lives” right now as they face extreme and dangerous new regulations which if implemented could devastate the lobster industry we have today, and impact the entire economy throughout the state and beyond with a trickle-down effect like no other, with the potential to affect seafood markets and grocery stores, bait dealers, seafood processors, truckers, fuel companies, marine mechanics, trap builders, marine supply stores, restaurants, everyday people who buy seafood, and the biggest moneymaker for the state of all - the tourist industry."

Lobstermen are facing the real threat of being forced out of business and a livelihood that they have relied on for many generations. An entire fishing heritage dating back hundreds of years is at risk and the decimation of an entire infrastructure is a stake as a result of regulations set by NOAA and NMFS put into place to try to protect Atlantic Right whales."

To try and stop the regulation, "Mills is directing Department of Marine Resources Commissioner Pat Keliher to come up with a new risk reduction target based on the industry’s actual risk to right whales. Keliher will present a plan to achieve this new goal to the industry in August and the National Marine Fisheries Service in September."

Maine's congressional delegation even sent a letter to President Donald J. Trump asking him to intervene and stop the damaging new rule. Congressman Jared Golden posted the following on Facebook, summarizing the content of the delegation's letter:

On behalf of Maine lobstermen, I, along with Senator Susan M Collins, Senator Angus S. King, Jr., and Congresswoman Chellie Pingree, urge you to intervene in the implementation of @NOAA’s new regulations on our lobstermen. It's time to #StandUpforLobstermen

Without changes, NOAA’s regulations will wreak havoc on lobstermen and communities up and down Maine’s coast ... but NOAA doesn’t have the data to show that right whales travel through Gulf of Maine where lobstermen work.

These new rules won’t achieve NOAA's desired outcome — helping whales — and will put lobstermen out of business. It’s the worst kind of regulation. Maine lobstermen are looking to you, President Trump, to have their back.

The point of this regulation is to save the right whale from the supposed dangers of the lobstermen. But, if you ask anybody actually in Maine and in the business, it is a ludicrous regulation because right whales are very, very rare in Maine waters.

As CBS 13 reports, " For lobsterman George Anderson, he's never seen one in his 40 years of fishing. 'Seen all kinds of whales, basking sharks, sun fish but no right whales,' Anderson said."