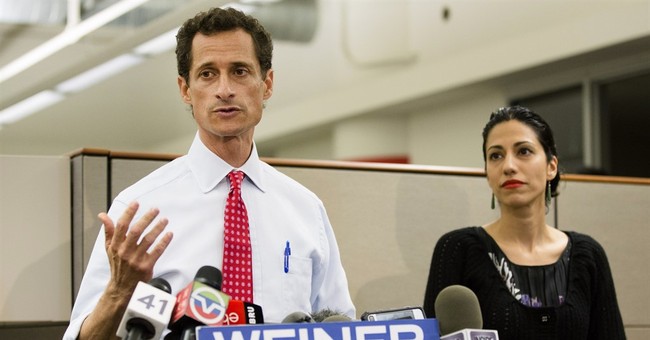 New York City Mayor Bill De Blasio could possibly be the most despised politician in all of America. Seventy-six percent of New Yorkers don't even want him to run for president. His hatred begs the question, how on earth did he ever become mayor (twice) if his own city dislikes him so much?

Well, his ascent is partially thanks to a weak NYC GOP who has not put up a viable mayoral candidate in some time, but the real credit goes to that pervert, Anthony Weiner.

In 2013, Weiner was mounting a political comeback. Two years earlier, the late-great Andrew Breitbart exposed the congressman's penchant for sexting dozens of younger girls and using online pseudonyms to cheat on his wife. After blaming Breitbart, claiming the conservative had hacked his Twitter account, he then admitted to his immoral activity. He ended up resigning in June of 2011 and promised to make amends.

Incredibly, he announced his campaign for Gotham City's mayor in May of 2013.

"To some degree, it's now or maybe never for me, in terms of running for something," Weiner told the New York Times Magazine upon announcing his campaign. "Also, I want to ask people to give me a second chance."

By all accounts, he was leading the Democratic primary polls from the moment he announced. The second closest candidate was Christine Quinn who was vying to become the first woman and openly gay leader of New York City. De Blasio wavered around third or fourth place, barely getting 10 percent of support.

Things were going swimmingly for Weiner that summer of 2013, but sadly he had not actually reformed his ways. He was still sexting women across the web.

A 23-year-old woman by the name of Sydney Leathers came forward with the revelations that, despite Weiner's public confession and pleas for mercy, Weiner was still contacting women on the internet.

Leathers revealed he used the penname "Carlos Danger" for his online chats. This monicker stuck, the mayor tried downplaying the chats again, but the people of New York were not buying it.

He refused to drop out of the race and slowly slipped in the polls. But, his supporters did not rally around the second place Quinn but instead went towards De Blasio.

De Blasio then won handily both the primary and the general election. The GOP never had a real chance. De Blasio won re-election in 2017, despite not being popular.  Weiner went on to get arrested for sexually enticing a minor to take off her clothes via online communications. He also played an instrumental role in the FBI's 2016 investigation into Hillary Clinton after authorities discovered government communications on the same laptop he was using for his personal proclivities.

If he had simply not been a weirdo with a sex addiction problem, it is likely De Blasio would have remained an obscure public advocate in New York rather than a 2020 presidential candidate.