WATCH: First Ever Medal Of Honor Action Captured On Video 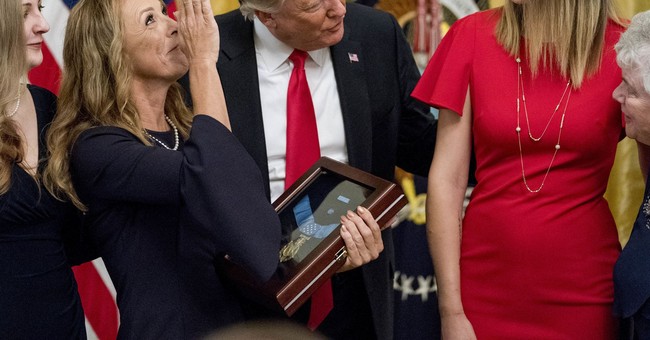 As technology develops, so too does insight into areas of life never before seen except by firsthand experience. But, now, Americans are able to see the heroic acts of those willing to sacrifice their lives for us on a daily basis thanks to drone technology. In a historic first, the actions of a Medal of Honor recipient have caught on camera.

As reported by Task and Purpose, Air Force Technical Sgt. John Chapman's stunning bravery is now available for the public to see because "hovering over [Chapman] was a CIA predator drone and other surveillance asset."

Via Task and Purpose

Chapman, an Air Force combat controller, was posthumously awarded the Medal of Honor in August 2018 for his bravery during the 2002 Battle of Takur Ghar in Afghanistan, in which he charged enemy bunkers and exposed himself to blistering fire while trying to rescue a fallen comrade.

"You'll watch Chapman's heroic actions as he saves the lives of his entire SEAL Team and then another 18 members of a quick reaction force, earning America's highest award, the Medal of Honor," said author Dan Schilling, co-author of the new book Alone At Dawn.

Alone at Dawn is "a story of heroism of not only of one man, John Chapman, but a heroic breed of American warriors -- Air Force Combat Controllers. Dan Schilling writes a gripping account of Chapman's last moments and pays homage to a brotherhood dedicated to keep America safe and free." according to Dr. Robert Kadlec, former Deputy Staff Director, Senate Select Committee on Intelligence and Special Assistant to President George W. Bush.

Task and Purpose details how much Chapman endured in order to save his fellow man:

Chapman's actions occurred on March 4, 2002 during Operation Anaconda, the largest battle involving conventional U.S. troops in the Afghanistan War. While attached to SEAL Team 6 as a combat controller — the team's expert on air strikes and communications — Chapman was one of the first off the helicopter as the team tried to rescue a fallen SEAL.

Trudging through thigh-deep snow, Chapman and the others fought back against al Qaeda fighters that had dug in on the mountaintop. And when the team fell back under withering enemy fire, Chapman remained behind to fight on for an hour and attempted to cover the approach of a quick reaction force, before he was shot and killed.

In 2018, President Donald J. Trump awarded Chapman the Medal of Honor saying, "In that final act of supreme courage, John gave his life for his fellow warriors. Through his extraordinary sacrifice, John helped save more than 20 American service members, some of whom are here today."

Recommended
The Conservative Populist Coalition Has Grown in Pennsylvania. What That Means Going Forward Is Important
Salena Zito

Dan Schilling details the events in the following video: