Facepalm: Megan Rapinoe Says She'll Have A 'Substantive Conversation' With Anybody Who Agrees With Her 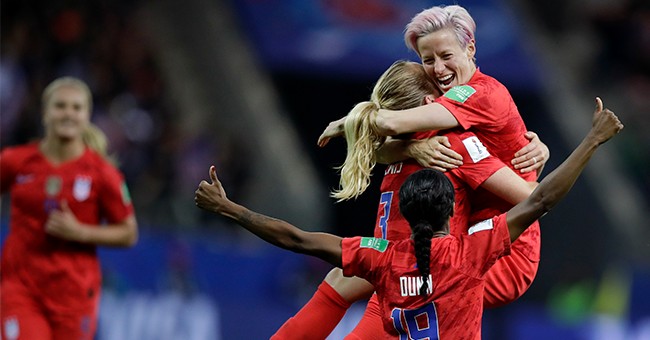 United States soccer star Megan Rapinoe sat down with CNN Tuesday night to discuss who she is, and is not, willing to meet within Washington, D.C. Turns out, the anti-Trump Global World Cup champion is only interested in speaking to people who believe in the same things as she does.

"Yes to AOC, yes to Nancy Pelosi," Rapinoe said Tuesday regarding who in the nation's capital she would speak with. "Yes to the bipartisan Congress, yes to Chuck Schumer, yes to anyone else that wants to invite us and have a real, substantive conversation, and that believes in the same things we believe in." (emphasis added).

The Washington Examiner also reports that she told CNN's Anderson Cooper that she does not want to share the same space with President Donald J. Trump and sacrifice her status in order to give him airtime for his ideas.

"Every teammate I've talked to specifically about it would not go," Rapinoe told the host. "I don’t think anyone on the team has any interest in lending the platform that we’ve worked hard to build and the things that we fight for and the way that we live our life. I don’t think we want that to be co-opted or corrupted by this administration."

Rapinoe's line of thinking regarding "substantive conversation" is typical with leftist ideology. "Agree with me or shut up," tends to be the norm when your political philosophy relies on collectivist thinking sans the individual.

But, Rapinoe's answer about how fans can best help the women's soccer team earn equal pay may with men may indicate that she actually agrees with conservatives more on this issue than she understands.  Whether she knows it or not, Rapinoe told MSNBC that the voluntary marketplace and exchange of money and goods is the quickest way fans can ensure equal pay happens.

Megan Rapinoe on how fans can support the fight for equal pay: Come to games, buy jerseys, become season ticket holders, tell your friends about it. pic.twitter.com/Zooy7C3tEy

Getting fans to give you more money is the best way to get equal pay, not government mandates. This is what conservatives have been trying to explain to Rapinoe, but, hey, maybe she never bothered to chat with them because she thought they did not believe the same things she does.