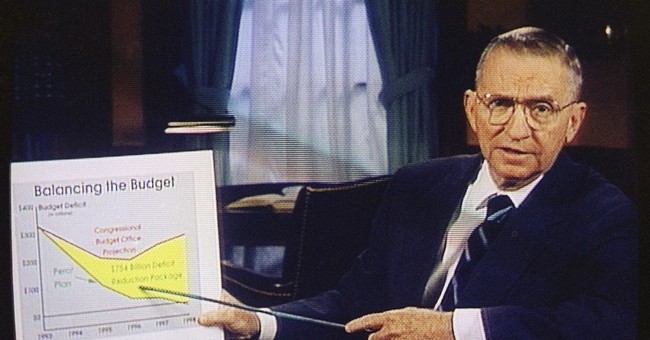 Ross Perot, a billionaire businessman and presidential candidate who made his fortune in the electronics and computer services industry, died on Tuesday after a five-month battle with leukemia, reports the Dallas News.

"Describe my father?" Ross Perot Jr., his only son and CEO of the Perot Group told the Dallas News. "Obviously a great family man, wonderful father. But at the end of the day, he was a wonderful humanitarian."

"Ross was the unusual combination of his father, who was a powerful, big, burly cotton trader — a hard-ass, practical, cut-deals person — and a mother who was a little-bitty woman who was sweet, warm, wonderful," Morton H. Meyerson, the former EDS and Perot Systems president and CEO said. "Ross was tough, smart, practical, loved to negotiate. But he had a warm and kind heart, too."

According to the paper, "As of July, Forbes estimated Perot's wealth at $4.1 billion, making him the 478th-richest person in the world. That didn't include the riches he bestowed on his family and community."

Perot had given millions of dollars towards charities, including the Teach For America program. The founder of TFA credits Perot with giving the funds needed to start the national program.

"In the spring of 1990, I needed to find $2 million to make it through the first year, pay all the training costs and so forth," said Wendy Kopp, founder of TFA. "After a long meeting, Mr. Perot told me that if I could raise $1.5 million, he would give the remaining $500,000. I knew at that moment that we would make it."

In 1992, Perot earned 19% of the popular vote as an independent presidential candidate. He again ran for president in 1996.