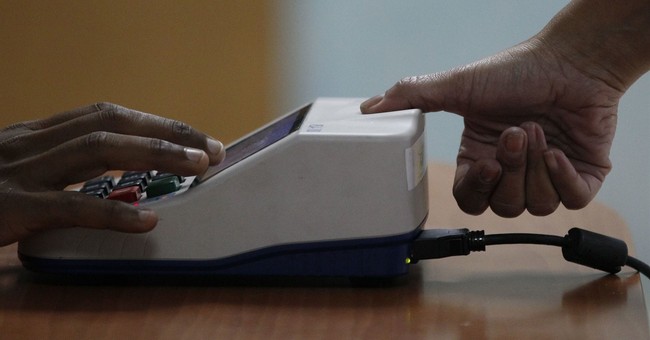 Michigan State Police have arrested a previously deported child molester after using a mobile fingerprinting device to identify the driver after he claimed that he had lost his wallet.

According to Cadillac News, police in Cadillac, MI pulled over a driver on Tuesday afternoon for a routine traffic stop. The man, who claimed he was from Texas, had two children in the back of his car. Police ran his name through their security background check system, but no driver by the name that was given showed up in Texas. Then authorities requested that he give them his fingerprint for a mobile scan.

The device that police used operated on blue tooth technology and instantly pulled up the man's record. Here's how the fingerprint system works:

The scanner is a device that uses a person's fingerprints to accurately identify individuals in the field via a trooper's patrol car-mounted laptop. If the person is wanted, "hit" information is supplied to the trooper with their photograph and other identifying features.

In the past, this type of information was only available after the person was taken into custody, driven to a post or other law enforcement agency and the process typically took hours to achieve.

After identifying the man in the car as the one in the photos and information provided by the fingerprint scan, Michigan State Police determined that he was a previously deported Mexican national who had been convicted of felony child molestation.

The arrest comes as authorities in Arizona caught another child molester this week traveling with a family unit in Tucson, AZ. The man arrested by Michigan State Police was handed over to Immigration and Customers Enforcement who will most likely deport him back to Mexico.