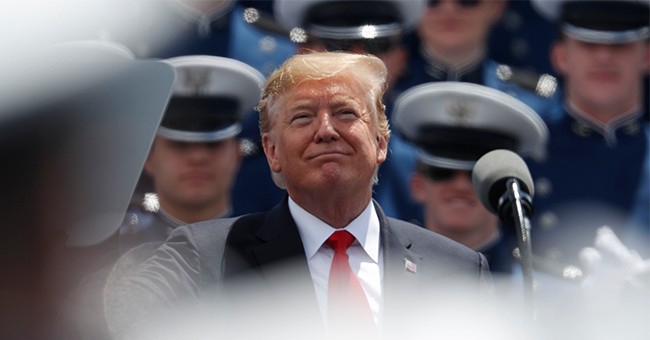 Ahhh, summer vacation -- a time for folks to wind down, hit the beach, and not pay attention to the news. Well, that'd be nice leftists simply cannot do that with President Donald J. Trump in charge. He kicked off summer 2019 with a tweet so masterfully trolling, you truly have to stand back and appreciate the havoc it is going to wreak upon leftist media outlets and Democratic officials on this fine first Friday summer afternoon.

At approximately 3:50 PM ET on Friday, President Trump sent an obviously comical tweet hinting that he will never give up the presidency and that leftists will be stuck with him "4 EVA."

Apparently, this tweet was made first by CarpeDonktum, a notorious Twitter troll who has crafted several other videos that the president has an affinity for.

The video, as the tweet above shows, features a series of yard signs that show "Trump 2020," Trump 2024," "Trump 2028," and so on for perpetuity. The original photo for this tweet was actually taken from a real Time Magazine article discussing how President Trump's version of populism will last well beyond his presidency.

Today, and it is unclear if this is related, Politico ran a serious story about how democratic lawmakers are concerned that the president will not leave the office if he loses re-election. So, when President Trump tweeted this video, the left went predictably apoplectic.

Ken Vogel was simply aghast and felt the need to point out that the video is in defiance of "human mortality."

FUNNY? The President of the United States just tweeted a video that envisions him remaining in the office for eternity in defiance of both human mortality & the 22nd amendment to the United States Constitution. https://t.co/wsvbDENhMw

The Young Turks' Emma Vigeland warned, "I'm not one to get riled up over Trump tweets, but this one is pretty damn scary. This man doesn't believe in a democratic form of government, and now he's putting feelers out there. He has to be defeated."

I'm not one to get riled up over Trump tweets, but this one is pretty damn scary. This man doesn't believe in a democratic form of government, and now he's putting feelers out there.

He has to be defeated. https://t.co/nPyXQqxdOY

Conservatives, and anybody with a brain, understood this was simply a troll tweet and not meant to be taken seriously.

I hope you all realize that we will never have a president who is this much of a troll ever again. https://t.co/4b1nQtDKkL

More than perhaps anything else, Trump excels at making people just lose their damn minds. https://t.co/xYnAH9NsEj

Even the creator of the meme understands that President Donald J. Trump does not take the video as advice for his future plans.

They are literally insane. Imagine believing that my meme is a real life goal of President Trump. https://t.co/WayzjXvtNA

The left's overall reaction to President Trump is always strange. They treat him like a joke on everything serious that he does -- the border, tariffs, tax cuts, Iran, and more -- but then take him so seriously when he is obviously joking.

But what really undermines the left's supposed concern for the sanctity of democracy is that the 2016 presidential loser Hillary Clinton has been pushing a bogus Russian conspiracy hoax and other loony ideas ever since President Trump defeated her and apparently genuinely believes that she should actually be president. Furthermore, Stacey Abrams in Georgia has still not conceded her 2018 gubernatorial race and has conspiracy theories of her own.

Maybe if the left held folks like those accountable for their insane ramblings and destruction of constitutional norms, or whatever the left fears that President Trump is supposedly doing, then their outrage at him would pack more of a punch.

Whatever the case, summer started today and the 2020 presidential race is just heating up. What a time to be alive.