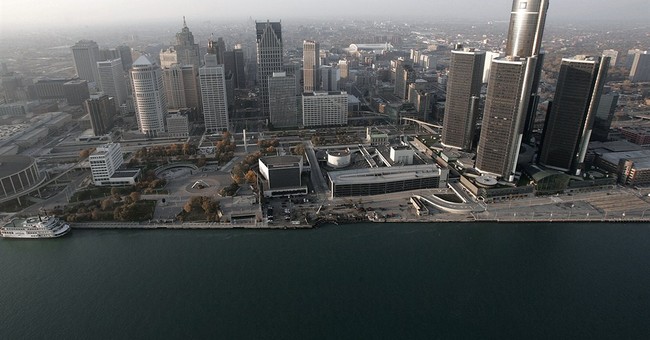 A few years ago, the city of Detroit finished installing 65,000 "light emitting diode" (LED) street lights in an effort to cut costs and pollution as well as increase safety. The new lights were part of a $185 million package meant to improve the city and were encouraged by President Obama's Department of Energy. But three years later in 2019, thousands of these bulbs are now needing replacement when the city expected them to last until at least 2027.

Earlier this spring, attorneys for the city sued the San Jose, California-based Leotek Electronics USA which supplied the LED lights after inspectors discovered the bulbs were "charred, burned, or cracked." The lights were supposed to last at least a decade, but in just three years thousands have proven to be duds.

The Detroit Free Press reports that the city's Public Lighting Authority began replacing the nearly 20,000 bulbs as the city's lawsuit works through the court.

In what is perhaps the most outrageous political spin ever uttered by a local government employee, Beau Taylor, executive director of the lighting authority, told the paper that replacing of lights represents the city's irrepressible spirit in the face of adversity.

"The relighting of the city symbolized the resurgence of the city," Taylor said. "If we get these things replaced, it's going to show that we're also resilient and able to respond to any issues that come up."

A September 2015 report, titled Restoring Detroit’s Street Lighting System, commissioned by President Obama's DOE said that "compared with the old lighting system, the new one is expected to improve reliability and safety, improve resistance to vandalism, and decrease opportunities for theft."

It also noted that "the incremental investment in LED products was easily justified, offering a simple payback of less than 2.5 years from energy savings alone."

Now, the city will spend at least $9 million to fix the problem.