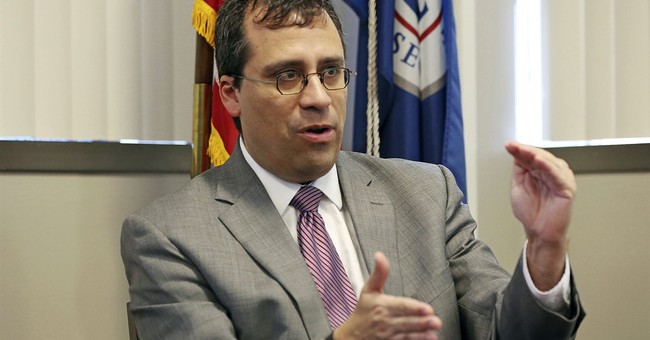 NBC News reports that L. Francis Cissna, U.S. Citizenship and Immigration Services Director, has been asked to resign from his post by President Donald J. Trump's White House according to an intra-agency letter sent by Cissna Friday afternoon obtained by the news network.

According to NBC, "the director of the agency overseeing legal entry into the United States, including through green cards and asylum, was asked to resign from the agency on Friday." Cissna's tenure will officially end June 1st. The resignation comes as the White House is expected to name Ken Cuccinelli to a top immigration post. According to the Washington Post, that position is expected to be as Cissna's replacement.

As noted by the paper, "Trump senior policy adviser Stephen Miller has been agitating for Cissna’s removal for months, and he has repeatedly railed about Cissna to the president, saying he is not in favor of the administration’s agenda" and has delayed some of the president's plans from moving forward.

The resignation follows the departure of Department of Homeland Security Secretary Kirstjen Nielsen earlier this spring, somebody who pro-Trump insiders viewed as part of "the swamp."

But, key establishment Republicans such as Senate Majority Leader Mitch McConnell have voiced their disapproval of Ken Cuccinelli as well. The Post reports that "McConnell has vowed to block Cuccinelli from getting confirmed for any position, blaming him for leading a 2014 effort defying McConnell that promoted insurgent candidates running against sitting Republican incumbents. And Cuccinelli signed a letter drafted by conservative activists two years ago calling on McConnell to step aside."

However, according to insiders, Cissna was actually very effective at implementing Trump's agenda. The Post says, "Cissna’s supporters — including immigration hard-liners — say he actually had more success than his border enforcement peers at Homeland Security in implementing the Trump administration’s agenda. He heightened scrutiny of legal immigration applications while continuing to naturalize thousands of lawful immigrants."

The Immigration official shake-up comes as President Trump continues to make immigration and border security his number one issue on the campaign trail.