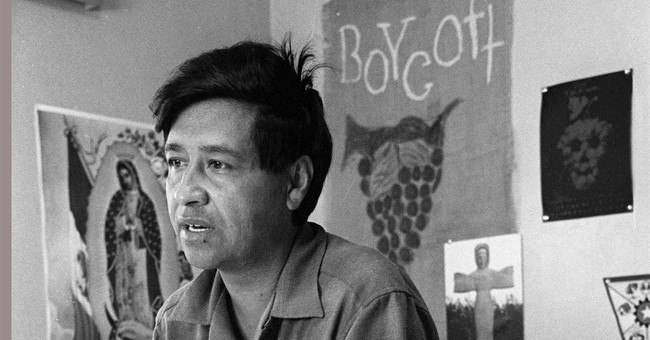 Arizona Congressman Paul Gosar introduced legislation this Friday to mark March 31st, the birthday of American labor icon and anti-illegal immigration activist Cesar Chavez, as "National Border Control Day" in recognition of Chavez's "fight to defend the interests of the American farmworkers" and for standing up against businesses who sought the use of illegal aliens as a means of cheaper laborers instead of American citizens.

“Cesar Chavez’s lifelong work to protect American workers should be echoed and celebrated throughout America," Congressman Gosar said in a press release.  "As open border Democrats continue to advocate against securing our southern border, it is critical to remember the damage illegal immigration does to legal American workers.”

The resolution itself notes that "Cesar Chavez believed that preventing illegal immigration was an essential prerequisite to improving the circumstances of American farmworkers" and "in 1969, Chavez led a march to the Mexican border to protest illegal immigration, joined by Senator Walter Mondale and Martin Luther King’s successor as head of the Southern Christian Leadership Conference, Ralph Abernathy."

Chavez, born March 31, 1927, dedicated his life towards helping American agricultural workers. In a great piece from National Review, Mark Krikorian notes Chavez's "views on border control would be a perfect fit in the Trump administration."

"In the mid 1970s, he conducted the 'Illegals Campaign' to identify and report illegal workers, 'an effort he deemed second in importance only to the boycott' (of produce from non-unionized farms), according to Pawel." Krikorian notes. "She quotes a memo from Chavez that said, 'If we can get the illegals out of California, we will win the strike overnight.'"

However, it should be noted that while Chavez himself was always peaceful some of his union associates did, in fact, turn violent. Some to vigilante justice against illegal immigrants and beating them up as they crossed the border.