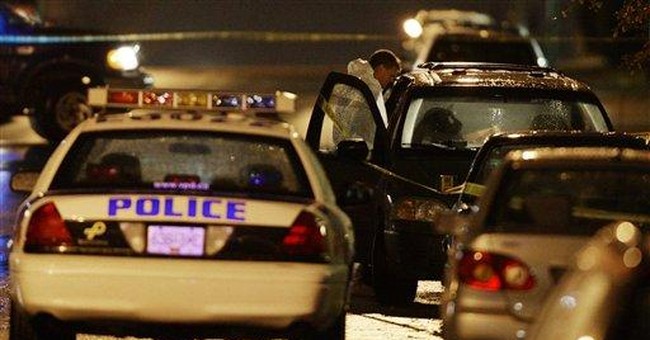 A fight between two Washington state middle schoolers at a basketball game broke out which in turn resulted in a mob scene of 70 teenagers swarming around dozens of police officers, ultimately leading to the arrest of nine instigators on Friday evening.

The Clark County Sheriff's office released a statement saying that "A 9-1-1 caller reported that there had been a fight between students who had been in attendance at a basketball tournament. The caller also reported that there was a group of teenagers trying to interfere with and were assaulting school officials who were trying to deal with those involved in the disturbance."

"Three deputies arrived on scene and were immediately met with verbal hostilities from the large group of teenagers, to include racial slurs, cursing, and threats of assault," the sheriff's office continued.

Once at Gaiser Middle School in Vancouver, WA, authorities "relayed that they needed immediate cover due to riot conditions.  Numerous officers...responded in an attempt to gain control of the situation.  At one point there were a total of 33 police units on scene attempting to deal with the situation."

The police warned the ruffians that if they did not disperse, they would be placed under arrest. At this point, Several individuals refused to leave and were subsequently arrested.  One deputy received minor injuries while struggling with one of the suspects during an arrest." In total, nine individuals were arrested with charges ranging from " Trespass, Fail to Disperse, Assault IV, Assault III, Disorderly Conduct, and Resisting arrest."