Report: US Reaches 'Remain in Mexico' Deal in attempt to keep Caravan out of America 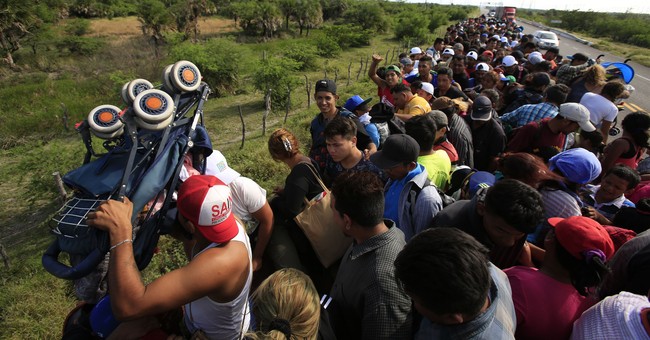 The Washington Post reports that President Donald Trump has reached a deal with the Mexican government to keep the migrant caravan, composed of thousands of Central American asylum seekers, within Mexico as the United States' court system processes refugee applications.

The deal known as "Remain in Mexico", would "break with long-standing asylum rules and place a formidable barrier in the path of Central American migrants attempting to reach the United States and escape poverty and violence. By reaching the accord, the Trump administration has also overcome Mexico’s historic reticence to deepen cooperation with the United States on an issue widely seen here as America’s problem.

The Post says that Mexican officials and senior members of president-elect Andrés Manuel López Obrador’s transition team say the plan would mean that "asylum applicants at the border will have to stay in Mexico while their cases are processed, potentially ending the system, which Trump decries as “catch and release,” that has generally allowed those seeking refuge to wait on safer U.S. soil."

“For now, we have agreed to this policy of Remain in Mexico,” said Olga Sánchez Cordero, Mexico’s incoming interior minister, the top domestic policy official for López Obrador, who takes office Dec. 1. In an interview with The Washington Post, she called it a 'short-term solution.'"

“The medium- and long-term solution is that people don’t migrate,” Sánchez Cordero said. “Mexico has open arms and everything, but imagine, one caravan after another after another, that would also be a problem for us.”

The Post also reported more specifics on the plan:

U.S. officials want to roll out the program at the San Diego border crossing to deal with the caravans that have become a source of frustration for Trump, but they envision it could be expanded to another five to seven crossings along the U.S.-Mexico border. Senior U.S. officials said they want more assurances on how Mexico intends to keep asylum seekers safe and to ensure they don’t get deported back to Central America before their asylum claims get resolved.

After an initial fear screening at the port of entry, the asylum seeker would wait until his or her scheduled court appearance before an immigration judge. Then the asylum seeker would be escorted to a federal courthouse by U.S. officers, but would potentially have to return to Mexico again if the judge did not reach an immediate determination on the claim.

Under the rules, an applicant whose asylum claim is denied would not be allowed to return to Mexico. Instead, the person would remain in U.S. custody and face immediate deportation to his or her home country.

The White House has not confirmed nor denied this report.