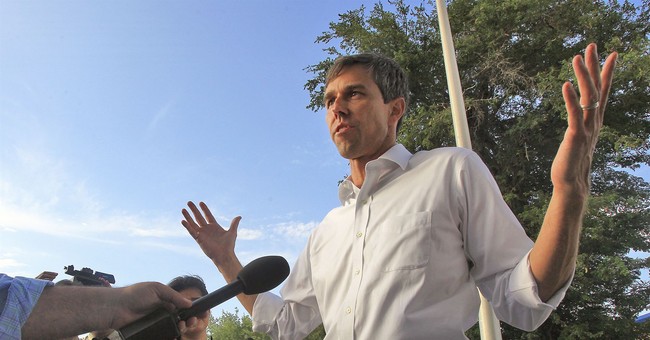 Sure, Beto O'Rourke appears dope and pretty and can skateboard, but that does not change the fact he is going to get walloped by Sen. Ted Cruz in Texas' polls come November. His gnarly skills also pale in comparison to Otto the Bulldog, who is much a better skateboarder.

Haley Williams of KRIS News tweeted the following clip of O'Rourke at his Saturday campaign rally as he rolled out to an adoring crowd.

.@BetoORourke skateboards onto stage at his Corpus Christi stop. pic.twitter.com/7sydBZyzWP

Apparently, the skateboard was a gift from novelist Bret Anthony Johnston. You will notice that Congressman Joseph Kennedy III is standing next to O'Rourke. That probably reminded you of his Uncle Ted Kennedy's drunk driving accident in Chappaquiddick, which should remind you of O'Rourke's own mischevious night. For those who do not know, the man trying to defeat Cruz for Senate fled the scene of a drunk driving accident at age 26. He recently tried to deny this ever happened, but even the Washington Post gave him four Pinocchios for that falsehood. Anyways, one could make an educated guess that perhaps O'Rourke simply likes to skateboard because he does not want to risk another driving accident, but that is not the case. Turns out, he has been skateboarding since his youth.

Johnston asks Beto how the skater “DIY” attitude translates in his campaigning. Also asks Beto to skate on stage, which he did. pic.twitter.com/rboyfiptRr

He even credits skateboarding with giving him a liberating, do it yourself attitude. The culture of the sport, plus punk rock, exemplifies the idea that "no one defines the rules or the opportunities or the limits of what you can achieve." This is precisely the exact opposite of what his party believes in. Democratic politicians contrive new rules each day that define what opportunities, what limits, and what achievements you can accomplish. President Obama even said himself "You didn't build that" is what business owners need to remember. But that does not matter for O'Rourke.

Which is too bad. Maybe if he were not a Democratic member, he'd have a better chance of being elected to Senate someday. As noted by the New York Times, despite the fact that O'Rourke has "raised over $38 million in the last three months alone, a staggering sum for a statewide race and the most of any Senate candidate in history," polling shows he is still down by 8 percentage points.

Which is why the media's obsession with how dope and pretty Beto O'Rourke is does not matter.  We are all better off watching YouTube videos of Otto the skateboarding bulldog than we are of this guy.