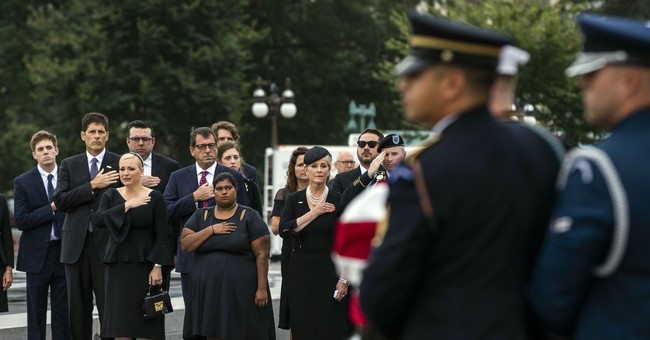 The daughter of the deceased Sen. John McCain gave stirring remarks at her father's funeral today, noting how the most important role he played in her life was as her father and commenting upon the many levels of sacrifice and dedication the former prisoner of war and public servant displayed for America throughout his life.

"John Sidney McCain III was many things. He was a sailor. He was an aviator, he was a husband. He was a warrior. He was a prisoner. He was a hero," the late senator's daughter, Meghan McCain, said at her father's funeral service in the Washington National Cathedral Friday. pic.twitter.com/QCCZqXA2f9

"We gather here to mourn the passing of American greatness -- the real thing, not cheap rhetoric from men who will never come near the sacrifice he gave so willingly," Meghan McCain noted.

"We live in an era where we knock old American heroes for all their imperfections when no leader wants to admit to fault of failure. You were an exception, and you gave us an ideal to strive for," she added.

Of the lessons her father taught her, resiliency ranked amongst the most important. "For the rest of my life, whenever I'd fall down, I'd get back up, whenever I am hurt I drove on, whenever I am brought low—I rise." But, McCain noted that her father was defined ultimately by one characteristic.

"John McCain was not defined by prison, by the Navy, by the Senate, by the Republican Party, or by any single one of the deeds in his absolutely extraordinary life. John McCain was defined by love," she remarked.

At one point, it appeared she took a shot at President Donald J. Trump who was not invited to the funeral by saying the America of her father was always great.

Meghan McCain, speaking at her father's funeral: "The America of John McCain has no need to be made great again, because America was always great." https://t.co/i6KqCPbjVM pic.twitter.com/pgdGr5FQ5c

The service was held at Washington National Cathedral today in DC. Sen. John McCain will be laid to rest in Annapolis, MD.