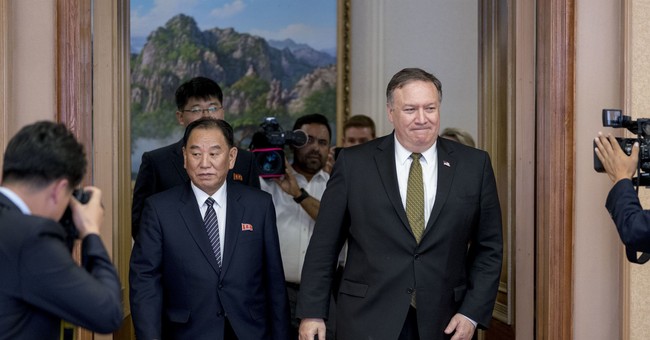 Just hours after Secretary of State Mike Pompeo said that his talks during the past two days with the North Korean government were “productive” and beneficial regarding “central issues,” the communist nation’s Foreign Ministry categorically disagreed, calling the meetings in Pyongyang “regrettable.”

The North Korean official added that this is a “dangerous phase that might rattle our willingness for denuclearization that had been firm.”

Earlier rumors during the week stated the State Department’s objectives in North Korea had changed and that the Sec. of State may be willing to forgo complete denuclearization.

“Nothing could be further from the truth,” State Department spokesperson Heather Nauert said in response. “Our policy toward North Korea has not changed, we’re committed to a denuclearized North Korea.”

After talks concluded, Sec. Pompeo asserted that the United States will again meet with North Korea next week in the demilitarized zone.

“We now have a meeting set up for July 12 — it could move by one day or two — where there will be discussions between the folks responsible for the repatriation of remains,” he said.

President Donald J. Trump and North Korean dictator Kim Jong-un met last June in a historic meeting that President Trump described as the start of a long “process" towards peace

Experts worry this process will be both costly diplomatically and in financial terms.

“While we were hopeful there would be some sort of breakthrough, it seems both sides agreed to merely keep talking,” Harry Kazianis, an Asia expert at the Center for the National Interest told the Washington Post.

“What concerns me at this stage is the secretary of state flying all the way from Washington to Pyongyang to try to engage in detailed working-level negotiations as an ongoing approach to negotiating denuclearization,” said Daryl Kimball, executive director of the Arms Control Association. “That’s unsustainable.”