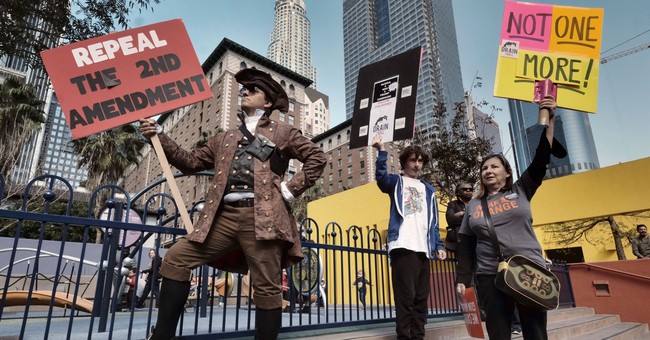 The Tampa Bay Times reports that the state of Florida failed to conduct certain background checks for applicants seeking to obtain a concealed carry license for more than a year because the employee in charge of the system could not log in into the FBI database.

Liberals have recently been placating the airwaves with the idea that in order to solve gun violence in America, the government simply needs “common sense” gun control laws. But, any law is useless if it is not enforced. It is even more useless if the people responsible for enforcing said law are morons who lack "common sense."  Perhaps no better example of this fact is a recent report that shows the state of Florida stopped running non-criminal concealed carry background checks on hundreds of individuals because the employee in charge of this necessary precaution could not log in to the National Instant Criminal background Check System. (Via Tampa Bay Times)

A previously unreported Office of Inspector General investigation found that in February 2016 the Florida Department of Agriculture and Consumer Services stopped using a FBI crime database called the National Instant Criminal Background Check System that ensures applicants who want to carry a gun do not have a disqualifying history in other states.

The employee in charge of the background checks could not log into the system, the investigator learned. The problem went unresolved until discovered by another worker in March 2017 — meaning that for more than a year applications got approved without the required background check.

During that time, which coincided with the June 12, 2016 shooting at Pulse nightclub that left 50 dead, the state saw an unprecedented spike in applications for concealed weapons permits. There were 134,000 requests for permits in the fiscal year ending in June 2015. The next 12 months broke a record, 245,000 applications, which was topped again in 2017 when the department received 275,000 applications.

The Florida Department of Agriculture and Consumer Services said this negligence resulted in 365 individuals being allowed to purchase guns without proper approval. Egregiously, of those 365, 291 individuals had their gun license revoked once a proper background check was completed. These revocations could be due to mitigating factors such as drug usage, mental illness, and more non-criminal disqualifications for a concealed carry.

But, the Department claimed that it had properly handled their employee's malfeasance upon learning of his failure.

"The integrity of our department's licensing program is our highest priority," said Aaron Keller, a department spokesman, when contacted Friday. "As soon as we learned that one employee failed to review applicants' non-criminal disqualifying information, we immediately terminated the employee, thoroughly reviewed every application potentially impacted, and implemented safeguards to prevent this from happening again."

As noted by newspaper, NICS "will flag applicants who have served time in prison for more than a year, are convicted of drug use in the past year, are undocumented immigrants or were involuntarily committed or deemed to have a 'mental defect' by a court or dishonorably discharged from the military."

The employee in charge, Lisa Wilde, told the Tampa Bay Times that she "dropped the ball" and added, "I know I did that...I should have been doing it and I didn't."

Common sense would say if they key tool needed to conduct your job is not working, you fix that tool so you can complete your job. Furthermore, where were her superiors with this lack of oversight? How is it possible somebody can go an entire year without doing their job?

Wilde's actions are worse than not having common sense. They were a willful neglect of her very important duty to run background checks to ensure public safety. This report is especially damning in light of the Florida nightclub "Pulse" shooting, Parkland shooting, and countless other examples of gun violence that could have been prevented if not for government failure.