Appreciate Anti-Gun Demonstrations and Modern Art? There's a Pretty Dumb Exhibit in Chicago For You 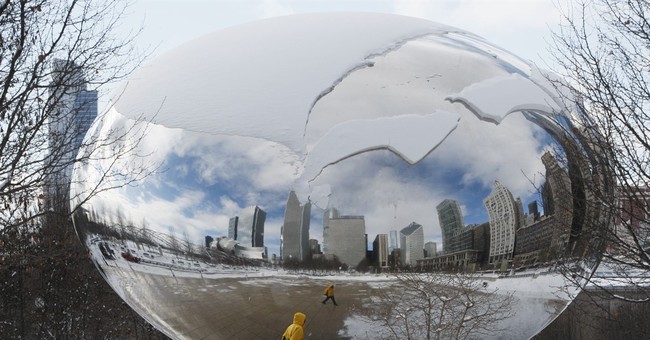 CNN highlighted a new art exhibit in Chicago that is supposed to highlight how easy it is for citizens to obtain guns such as the AR-15. Imitating the popular "bike share" concept,  the anti-gun group Brady Center to Prevent Gun violence has created a piece of art titled the "Chicago Gun Share Program." It features a rack replete with fake AR-15s that could be easily "rented" via credit card as if it were a bicycle.

"Our hope is to raise awareness of this important issue. We're hoping the Chicago community can take advantage of this ... and learn how simple it is for a civilian to obtain a weapon of war," said Max Samis, Brady Center press secretary.

"Our goal here is to start a conversation on one of the more burning issues of our day, and in the process, raise much-needed funds for the Brady Center to Prevent Gun Violence," said Vinny Warren, The Escape Pod executive creative director. "This issue is especially relevant to our home town of Chicago, which has suffered more than most from the plague of gun violence."

But, as noted by several conservatives on Twitter, the display is more akin to propaganda than any kind of art based in truth. It is actually very difficult to obtain an AR-15 and, hard to believe for some, not as easy as renting a bicycle.

Nowhere in this story does it note that the exhibit is misleading af. #Factsfirst*

*except the facts that challenge your liberal readers' prior assumptions https://t.co/HvY1HQ5Kya

Caleb Hull gave a condensed version of the actual facts of how renting a bicycle is different than buying a gun.

No where in this story does it mention how wrong this claim is. So I’ll do it for them.

Aside from the stupidity of the display, what is even weirder is that the parody site "The Onion" ran an article three years ago promoting the exact same thing. In an article titled "Chicago Introduces City Wide Gun Sharing Stations," the Onion wrote, "Touting the program’s convenience and affordability, Chicago officials unveiled Monday the city’s new gun-sharing service, “QuikShot,” which allows individuals to check out a loaded firearm for short periods of time."

"The municipal initiative, through which users can rent semiautomatic pistols, shotguns, rifles, and submachine guns at more than 250 self-service kiosks, has reportedly been designed to make firepower easily available to residents and tourists alike nearly everywhere within the city limits."

If anything, that Onion article points out how many guns proliferate the streets of Chicago despite Chicago's strict gun laws. The Brady Campaign's demonstration does not seem to point anything out other than a wild misinformation campaign about guns baked in half-truths and devoid of facts.