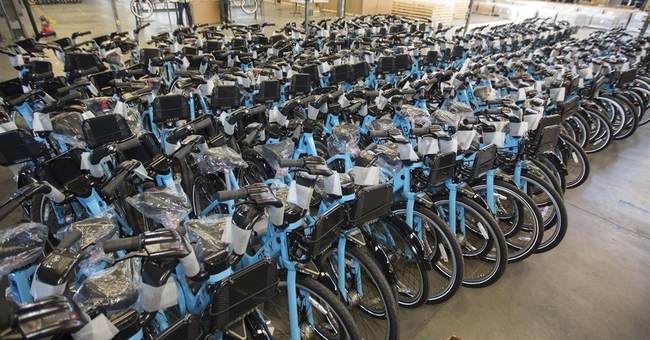 The Baltimore Bike Share system has been placed on temporary hiatus until the company behind the $2.36 million endeavor can add additional security to prevent the unprecedented levels of record theft that plague the program.

“We don’t have this issue anywhere else, not at this level,” Bewegen Technologies CEO Alain Ayotte told the Baltimore Sun earlier this week. “Our locking system is recognized [as] very, very up to industry standard, but due to the issues that occurred in Baltimore this summer, we did add additional security.”

The Bike Share system launched in fall of 2016 after supporters argued that the idea was  "critically important to changing the landscape of transportation in the city and showing biking is a safe, reliable and viable mode of transportation."

Eager cyclists were met with empty racks across the city for months on end. Balitmore citizens were told it was simply a “rebalancing issue." In reality however, the stealing was so bad that two employees were dedicated specifically to bike recovery.

While officials have refused to state exactly how many bikes were stolen, there were often over 100 bikes out of commission for repairs. It is likely many of these bikes faced damage after being ripped apart from the holding stations.

The illegal activity is hardly surprising. 2017 has been a record year for crime in Baltimore. In Early August, citizens held a “Ceasefire Weekend” with the slogan “Nobody kill anybody for 72 hours" as a rallying cry. Over 200 Baltimore citizens have been killed in 2017 so far.

Still, Alain Ayotte is confident his company can produce locks and safety measures tough enough for Charm City criminals claiming, “We’ve had different challenges [in Baltimore] than other places, but the city is 100 percent behind the bike share system so we’ll make sure we’ll overcome these issues.”