A 13 Year-Old Kid Is Running for Governor of Vermont 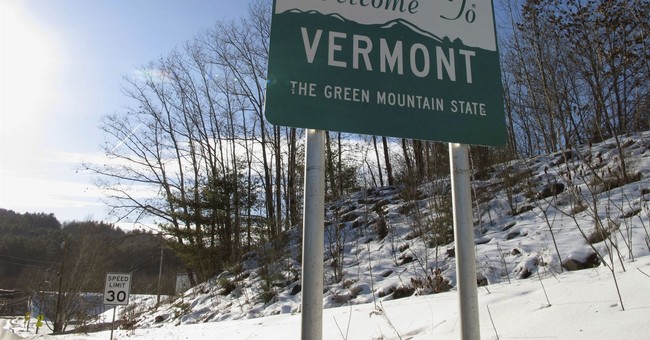 Ethan Sonneborn, age 13, has been running for governor of Vermont since October 2017. By all accounts, this is a very real campaign. Vermont is one of the few states with zero age restrictions on who can run for office. But, his candidacy is garnering new media attention in wake of the Parkland, Florida school shooting. He's now touting more gun control.

According to The Middlebury Campusnewspaper, his message is one of optimism and encouragement for young people to get engaged in politics.

"Ethan Sonneborn, an eighth grade student at Mount Abraham Union Middle School, announced this month his campaign for a spot in Vermont’s 2018 gubernatorial race. Sonneborn, a Democrat, aims to inspire other young people to participate in politics at any level.

“We need to engage young people in the process,” Sonneborn said in an interview."

Furthermore, it appears Sonneborn has been active in politics after he helped repeal a ban on talking during his lunch period.

"Sonneborn has been interested in politics and history for most of his life, after finding a photo of Robert F. Kennedy in an encyclopedia. He was just five years old. He even talked with his kindergarten teacher about becoming president someday.

His interest in politics turned into action in middle school, when he led a peaceful protest against a school ban on talking during his lunch periods. He and his friends held signs and refused to eat until administrators lifted the ban."

But nowadays, Sonneborn is focusing on gun control. His campaign slogan is "Because tomorrow matters" and he hopes that more gun control will help prevent future tragedies, according to NBC 5.

"My generation has been taking an important step in this because we’re the ones were getting shot," Sonneborn said. "This affects us directly and people who say it can’t happen in Vermont, we came this close to it happening in Vermont. It will happen in Vermont if we don’t take action."

The current legislation being debated in Montpelier would raise the minimum age to buy a gun from 18 to 21, limit the capacity of gun magazines, strengthen background checks and ban bump-stocks.

Sonneborn was one of about 2,500 people who participated in the March for our Lives in Montpelier.

He said he would like to see an assault-weapons ban added to Vermont's current bill.

I am not going to sit here and knock a 13 year-old kid for being passionate about politics, even if he is a Democrat. I used to be heavily engaged in politics growing up. Granted I never ran a campaign of any kind except a few student council campaigns. But, politics truly was, and in many ways still is, my passion. At age 13, my favorite activities were listening to Howie Carr on the radio right after school and then Michael Savage in the evenings. Pretty nerdy.

My all time favorite political moments came at two left-wing events. When I was 12, I made a hippie in Kennebunk, Maine miss her bus at an anti-Iraq war rally because I stood debating her for a half hour. That was fun. Then in 2012 during the New Hampshire primaries, I was privy to see an anti-capitalist Occupy Wall Streeter selling paintings to raise money for himself and the "movement." You might say, "Hey, he is engaging in capitalism." I did. His response was, "Whose campaign are you working for?" When I told him I was not working for any campaign, he said, "Oh yeah, then why are you so dressed up?" I was wearing a navy blue sweater from the GAP, khakis, a button down, and boat shoes. If being fresh to death like that is a crime, then lock me up.

So have at it, Ethan Sonneborn. Hopefully your parents prevent you from getting into too much of the ugliness that currently pervades politics. But, you are in Vermont. People are pretty nice there. Maybe your views will change. Maybe not. Good luck.