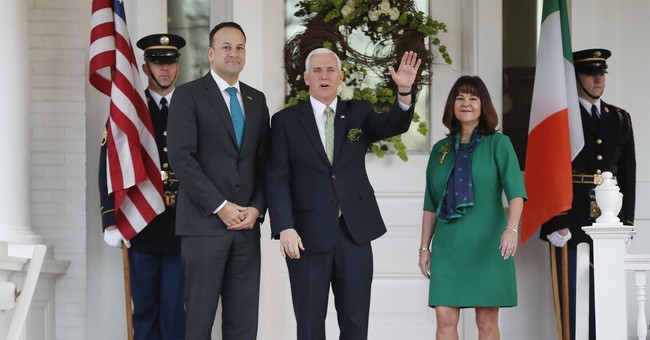 On our way to Savannah! Glad that my mom, Nancy Pence-Fritsch, could join Karen & me in to celebrate St. Patrick's Day. Her father came over from Tubbercurry Ireland to America in 1923. Read about our family's Irish roots here: https://t.co/TiFtcaMUyQ pic.twitter.com/pZ5pOfaBhh

According to media reports, the Pence family walked about 1/3rd of the way in Savannah's St. Patrick's Day parade. The Vice President shook hands and greeted his fellow citizens.

Vice President Pence sported a patterned green tie while his mother donned a green scarf and his wife wore a nice green sweater as well.

In 2017, Mike Pence credited his success to his Irish heritage.

“It does all go back to that day. It was Inauguration Day just a few short weeks ago. People ask me what I was thinking about surrounded by my wife and my children, our beautiful new daughter-in-law. My mother was just there, a few seats behind the President. I just kept thinking of that day in April in 1923. That was the day when Richard Michael Cawley stepped off the boat on Ellis Island. He was in his early 20s when he steamed into Upper New York Bay aboard the Andania, the ship that carried him here," he said at the American Ireland Fund National Gala in March 2017

"I can’t imagine what the sight of the Statue of Liberty meant to him that day, holding aloft the torch of freedom. My grandfather went home to be with the Lord when it was in about my 26th year. But we were very close. He said I was the only Irishman born among the four boys in our family. Not sure yet what that meant. But I was flattered by it," he told the crowd.

The Vice President added, "The truth is that whatever honors I will receive over the course of my service as Vice President, and to receive an honor in the name of the Irish people and my Irish heritage will count as chief among them. Because all that I am and all that I will ever be and all the service that I will ever render is owing to my Irish heritage. And I will summon what is the best of it as I serve the people of this country with the faith, with the determination, with the cheerfulness, the humility, and the humor that is characteristic of the great people of the Emerald Isle."