Florida High School Shooting Survivor's New Ad: 'What If Our Politicians Weren't the B*tch of the NRA' 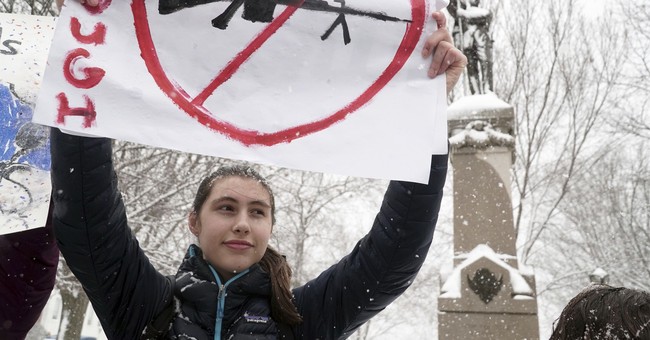 Marjory Stoneman Douglas High School's David Hogg is featured in a new advertisement for the March for Our Lives protest scheduled next week. In the video, he has some choice words for politicians who support the second amendment.

The Daily Caller's Amber Athey picked up the online advertisement, noting, "The video starts on an edgy note, with Hogg glaring into the camera and declaring, 'What if our politicians weren’t the b*tch of the NRA?

'What if we all voted and said this was not okay?' he continued. 'What if we stood up as Americans and fought for our freedom and our children’s lives? My name is David Hogg and I stand with the #NeverAgain movement," he added at the end.

#WhatIf we could go to school without fearing for our lives? Join us on March 24th and visit https://t.co/SrCltJsrBH #NeverAgain pic.twitter.com/iXmCNFOrVj

Earlier this month, Townhall's Guy Benson reported on another Parkland survivor student who happens to disagree with much of what David Hogg has to say and with the way he says it.

At the time, Guy wrote "Kashuv is just as much a Parkland survivor as now-familiar names like David Hogg and Cameron Kasky, yet his views have only garnered limited attention. I ask him why he thinks that's the case. 'I don't know,' he says, hesitantly. 'Maybe because I don't use inflammatory language.  I speak calmly and logically without much emotion. I don't necessarily make the very best headline.'"

Kashuv went on to say that his pro-second amendment stances likely contributed to the blockade put on him by the mainstream media. Since Guy's interview on March 5th, Kashuv has met extensively with lawmakers and members of the media from both sides of he aisle.

As Micah noted, Kashuv is also able to back his standpoint with facts and logic. In a recent interview with Piers Morgan, Kashub stood his ground.

"That's not the argument at all," Kashuv replied. "Why shouldn't a mother, a single mother, of two be able to defend her children in her own home, who's 20? Why can't a 20-year-old, single mother be able to defend her children? Raising the age from 18 to 21 won't solve the problem. It's simply, like, a reactionary statement to what happened in Parkland."

When Morgan followed up with a statistic that the United States has "more gun deaths than the next 22 richest countries in the world combined," Kashuv replied with the numbers the media doesn't like to bring up.

"Most of the deaths that you see are from suicides," Kashuv stated. He's right. In 2015, The New York Times published a piece stating just that. To follow up, Kashuv also said, "The next majority...is gang-related violence. And stripping away the rights of individuals who are law-abiding citizens, won't solve the problem. And let's say we look at assault rifles, three percent of all gun deaths are with assault rifles. Sixty-eight percent of those are suicides."

The March for Our Lives advertised by Hogg will occur next Saturday in Washington, DC.