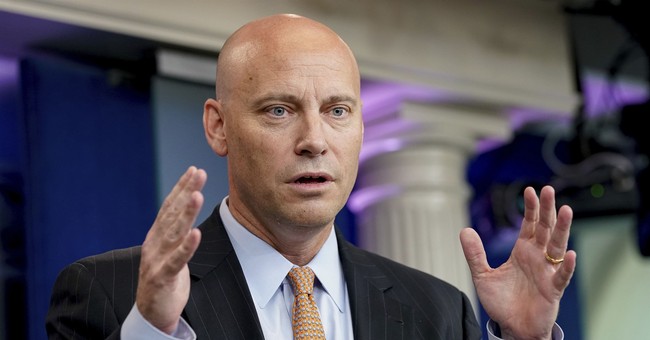 Meet the Press' host, Chuck Todd, asked Short what missteps were taken by the White House in hiring Rob Porter.

Short responded, saying that many in the White House considered Porter to be a friend and an outstanding worker. But, Short emphasized that there is “no tolerance for domestic abuse. And there can be no tolerance for violence against women and we have to be absolutely clear about that.”

Short then emphasized that as soon as Chief of Staff General John Kelly learned the full extent of the allegations, Porter was off the job job within 24 hours. “…they provide somebody an interim security clearance, that means that they’ve done an initial vet and say, this person is okay, there are some mitigating circumstances we’re going to continue to investigate. We had not received a final investigation. When General Kelly learned the depth of the nature of the accusations Tuesday night, by Wednesday morning Rob Porter submitted his resignation.”

Todd pressed Short as to how it was possible that General Kelly did not know earlier, Short again returned to the fact they were using the same clearing process as previous administrations. When asked why staffers such as President Trump's son-in-law, Jared Kushner, receive certain information, Short maintained that the president "has not waived any security clearances."

Many in the media and political circles have speculated that General Kelly, or others in the White House, should step down for failing to fully vet Rob Porter.